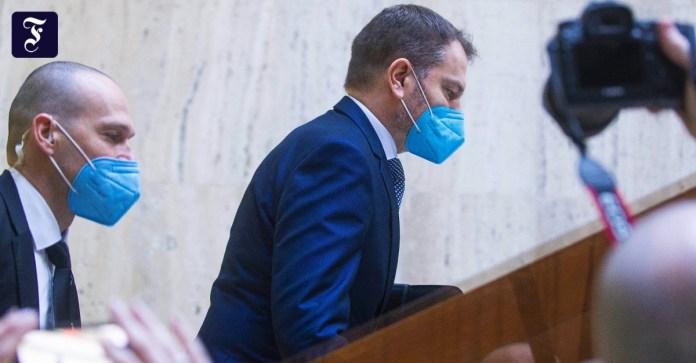 EA castling is supposed to solve the severe government crisis in Slovakia. Prime Minister Igor Matovič complied with the resignation calls on Sunday evening, which not only two partners in his four-party coalition had called for, but also President Zuzana Caputová. He will now be replaced by the previous finance minister, Eduard Heger, a politician from Matovič’s Olano party.

The party leader remains in the cabinet, the two swap places. The crisis caused by Matovič’s unauthorized order for the Russian vaccine “Sputnik V” had come to a head the week before when all ministers of the junior partner “Freedom and Solidarity” (SaS) left the government.

Matovič had to forego conditions

The chairmen of the other governing parties, Boris Kollár (“We are family”), Veronika Remišová (“For the people”) and finally Richard Sulík (SaS) were satisfied with the change of place. Matovič had to forego a number of conditions that he had set a week earlier as a prerequisite for his resignation. He had demanded, among other things, that his party should receive an additional cabinet post and that his main critics should no longer belong to a future government.

Now he said these conditions could be forgotten. Thereupon Sulík also adopted a conciliatory tone. He announced that it was understood that Matovič’s resignation was not an easy step in view of his clear election victory last year.

Whether Matovič and Sulík in particular, both of whom are described as distinct alpha animals in the Slovakian capital Pressburg (Bratislava), will in future be able to work together as equal cabinet colleagues without conflict is another matter. Both once belonged to the SaS together until Matovič was expelled ten years ago due to deviant voting behavior.

The former media entrepreneur founded the protest party Olano (“Ordinary People and Independent Personalities”), with which he celebrated a surprise success in February 2020. With his new conservative-national-liberal four-party coalition, he was able to end the supremacy of the long-standing ruling party Smer. His term of office now ends after just one year. The government was overshadowed by the corona pandemic from the start. The swearing-in of cabinet members in the open air with face masks by President Caputová in March of the previous year is symbolic of this.

It is her turn now, because according to the constitution, the resignation of the prime minister means the end of the entire government. It is expected that Heger will first visit the factions of “For the People” and SaS this Monday to ensure their support; The boss Kollár has already promised him the support of “We are family”. Then Heger wants to request a meeting with Caputová.

The liberal head of state is likely to have already been involved in the negotiation of castling. At the beginning of last week, Caputová made it clear in a public statement that after four ministers had already left (two more were to follow), Matovič could no longer remain at the top of the government. The country, which has been badly affected by the pandemic, needs a government capable of acting.

Slovakia initially got off lightly in 2020, but was then hit all the harder by the “second wave” of the pandemic. According to his critics, Matovič’s erratic and uncoordinated actions intensified the crisis. Last autumn, for example, he ordered mass tests, but without including them in a comprehensive concept for follow-up and continuous follow-up testing. The result was a deceptive feeling of security that made the virus even more likely to spread.

The barrel overflowed his Sputnik order against the express resolution of the cabinet, in which SaS and “For the People” opposed it. Nevertheless, Matovič ordered the Russian vaccine, which has not yet been approved by the EU authorities, and staged himself when he personally received the first delivery at the beginning of March. Sputnik is not yet being used widely: the Slovak health authorities are also still checking.

The ISM confectionery fair will be canceled in 2021

FAZ Wissen – the podcast: Covid-19 and the long-term consequences: Who...

Are You the One: Oliver Pocher destroys presenter Sophia Thomalla with...