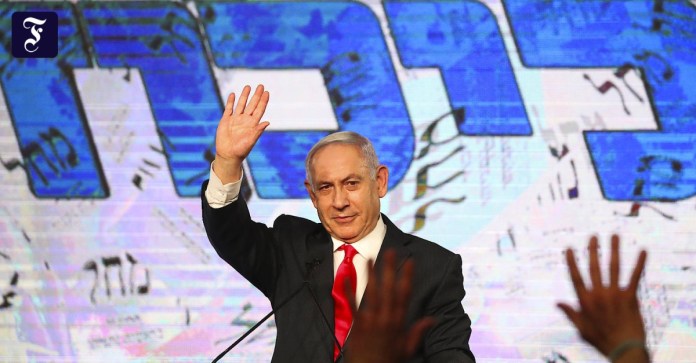 Dhe election campaign at the end of the pandemic was short and fierce. But the preliminary result once again looked as if Israel were caught in a time warp, from which even the election party dramaturges were no longer able to distract. The incumbent Prime Minister Benjamin Netanyahu did not achieve a clear majority of his own government even after the fourth election within two years.

After he had announced a warning of a fifth election in addition to his achievements in his speech on Wednesday night, his Likud election officials forgot to tumble the blue and white balloons that were hanging in a net from the ceiling. They did not do that until the Prime Minister and his ministers had disappeared and the room had long been largely empty, as filmed by a journalist who had stayed. Even Netanyahu no longer spoke of an election victory.

In the course of the next day it became increasingly clear that this parliamentary election did not produce a clear winner, but a crippling result, even if the announcement of the preliminary official final result is not expected before Friday. Thirteen parties are likely to have made it into the Knesset. Collectively, more Israelis voted for parties that called for Netanyahu’s replacement. But the divided opposition was unable to agree on an alternative. So the Prime Minister remains the dominant force for the time being. The Likud received the most votes with around 30 seats, even if 61 are necessary for a majority. His rivals can hardly form a coalition against him in the current constellation.

Should the upcoming coalition negotiations then get lost in hopes, there would be another, fifth election in the summer. During this time, the prime minister would remain in office on an interim basis, which is the best position for the corruption accused Netanyahu to face his criminal case, which will continue on April 5.

“We are currently heading towards the fifth election, more than anything else,” said Deputy Health Minister Joav Kisch on election night before his Likud party banned ministers and parliamentarians from interviews on Wednesday. Netanyahu’s announced right-wing government was missing two or more seats as of Wednesday. The two ultra-orthodox Jewish lists, with a total of around 15 seats, performed as stable as usual. And for the first time, the party union “Religious Zionism” made it into parliament, which consists of racists, homophobes and religious fundamentalists. But even with the extremists involved, a majority for Netanyahu seems uncertain, even provided that Naftali Bennett and his right-wing party Jamina join the coalition, whose votes would also be necessary to achieve the 61 seats.

Many then expect that this coalition will pass laws that grant the accused prime minister impunity. Whether Bennett will support this, however, is uncertain, which for that reason alone promises difficult coalition negotiations. “I alone do what is best for the State of Israel,” said Bennett ambiguously after the election. The fact that his Jamina party and the “New Hope” list founded by apostate Netanyahu opponents from the Likud only got seven and six seats, respectively, indicates how much the right-wing majority still stands by Netanyahu’s side, which is also true for them Ultra-orthodoxy applies. In any case, ideologically speaking, more than 70 of the 120 Knesset seats went to right-wing parties. Netanyahu alone was controversial here.

The Likud received fewer votes on Tuesday than in the previous three elections in 2019 and 2020. The normalization agreements with the Gulf States and the successful Israeli vaccination campaign did nothing to change that. Observers disagreed as to whether the high vaccination rate, which the head of government had placed at the center of his election campaign, even played a role in the election. In any case, the orientation of the political camps has hardly changed as a result of the vaccinations.

An Islamic party as kingmaker?

In addition to the left-liberal Meretz Party, the Social Democratic Labor Party (Avoda) also performed better than the surveys assumed. “Israel can look completely different,” said Avoda boss Merav Michali, “it can and will get better.” And Jair Lapid, chairman of the second-largest party, Yesh Atid, with around 18 seats, promised: “A government based on the votes of the By Kahanists, Lapid meant the Jewish terrorist group that is openly revered by a high-ranking representative of the religious Zionism party alliance.

Netanyahu has made an electoral agreement with “Religious Zionism”. But even with this political act of desperation, it does not seem to be enough for a majority of its own. This would require a contradicting partnership between the Jewish extremists and the Islamic conservative Raam party, which also made it into the Knesset and whose chairman Mansour Abbas played the kingmaker on Wednesday: “Nobody has us in their pockets, neither the right-wing nor the party Left. ”Netanyahu also kept all options open in his election speech. “I am extending my hand to all members of parliament who believe in my principles,” said the head of government. “I’m not excluding anyone.” Otherwise, he said, threatened the fifth choice.

“As long as Netanyahu is there, the crisis will continue,” said the chairman of the Israel Democracy Institute think tank, Jochanan Plesner. “Unless he finds a way out of his legal troubles.”

Camping industry in MV with overnight stays in the Corona year...

“DSDS”: candidate back with Dieter Bohlen after ten years – jury...

His master’s voice ?: Why Trump’s vice Mike Pence is now...

Xbox Series X / S-Controller: This trick saves you the annoying...