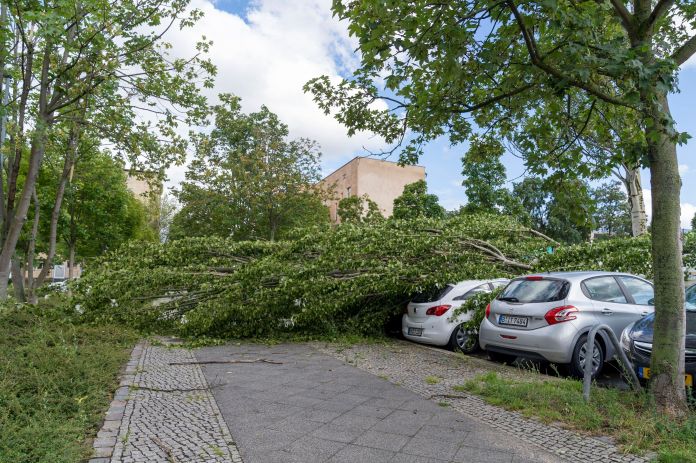 No more spring, at least for a few days – from today the warm temperatures, which Berliners have been happy about in the past few days, are falling into the cellar! It’s getting cool, and there is even frost on the weekend. And now weather experts surprise with a completely crazy forecast: Will a hurricane sweep Germany in the coming week?

According to the weather platform wetter.net, there are already thunderstorms and heavy rain, especially in southern Germany. “The weather changes with kettledrums and trumpets, then polar air flows into Germany from the north. Tomorrow it will be around 10 to 12 degrees colder than yesterday, ”said a press release. “In the nights there is also light frost or at least ground frost almost everywhere, and in the coming night and tomorrow morning there will be snowflakes in the low mountain ranges and on the Alps.” On Saturday and Sunday, temperatures across Germany are expected to drop below zero degrees.

“When it comes to the weather, a meteorologist won’t get bored again in the coming days,” summarizes Dominik Jung, meteorologist at wetter.net. “First there is a thunderstorm today with heavy rain, then the polar air arrives all over the country with post-frost and snowflakes far down, and then there is a mostly sunny but cold first weekend in March. At night we have to reckon with frost down to minus 10 degrees again. Next week the next change in weather will be announced: weather forecast to the west! According to the current calculations, it will be very windy to stormy. “

Expert: “You rarely see such violent gusts of wind over the whole area.”

For some parts of Germany it could be “pretty rough,” he says. “But there are still exactly seven days until the possible storm event. A lot can still change there. ”But the storm weather map is definitely impressive. “You rarely see such violent hurricane gusts on weather maps.” At least on the weekend it should be nice now – cold but sunny. “The sun often shines on Saturday and Sunday, but it’s fresh. 5 to 10 degrees are reached. Later, clouds will appear in the north. ”The first showers will not appear until Monday. “The next 7 days are going to be really turbulent and varied weather days,” says Jung.

Fed is not touching interest rates

“Tatort” today from Ludwigshafen: In the crosshairs of the Nazis