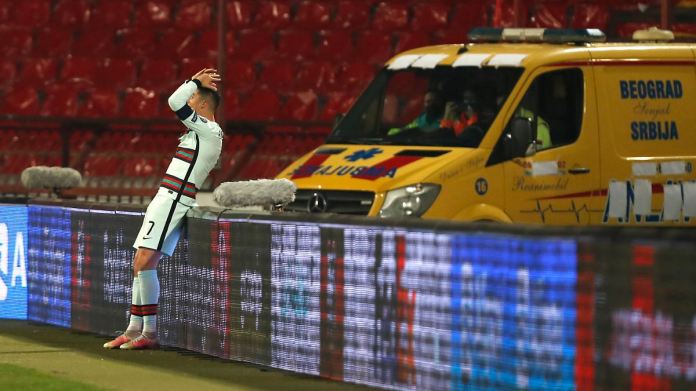 Portugal draw in the World Cup qualifier against Serbia because the referee does not count a late goal from Cristiano Ronaldo. The superstar is angry about it, receives yellow, storms angrily from the square – and later explains himself with a lot of pathos.
Shortly after the goal steal and the missed victory as a result, football superstar Cristiano Ronaldo had his head clear again for a message to the nation: Especially in difficult times, you have to face the next challenge, said the captain of the Portuguese national team on his late Saturday evening Instagram account with. The 36-year-old said he had the feeling that “an entire nation was injured”.

Portugal’s selection in the World Cup qualifier in Serbia had just won 2-2 (2-0), at least, but Ronaldo wasn’t angry because of the playful 2-0 lead. But about this one scene of the game in Belgrade, exactly after 2:51 minutes of stoppage time, when he scored the alleged 3-2 winning goal for the guests. But the Dutch referee Danny Makkelie did not give the goal.

After a wide cross, ball artist Ronaldo volleyed the ball half right just before the baseline, the ball rolled over the line – and was fully behind it. This was also shown by the often repeated TV pictures. Because Serbia’s goalkeeper Marko Dmitrovic had simply misjudged the long ball and only heaved it out of the goal behind the line.

Angry Ronaldo storms off the field

Ronaldo was already cheering about his winning goal, all Portuguese were already cheering, but Makkelie let play on. No goal – but yellow for the frustrated and protesting Ronaldo. The superstar later stormed off the lawn furiously, throwing off the dark blue captain’s armband. He no longer gave interviews.

But that was by no means meant symbolically. Because being the captain of the Portuguese team is for him the greatest pride and privilege of his life, Ronaldo assured on Instagram. “I give and will always give everything for my country, that will never change.”

In Group A, Portugal is in second place behind Serbia. In the duel, Diogo Jota from Liverpool FC put the Portuguese in the lead with a brace (11th / 36th). Aleksandar Mitrovic shortened right after the restart (46th), before Filip Kostic (60th) from Frankfurt scored the equalizer. The Serbs finished the game ten times, because in stoppage time (90th + 2) Nikola Milenkovic received the red card for gross foul play – he had knocked Danilo violently, but luckily did not fully catch the 29-year-old.

Turkish lira sags after the central bank chief is kicked out

Mary of Denmark: Little Angels! New photos for the 10th...

Now his family is complaining: Robinhood shows a deficit of 730,000...