The vaccine from Astrazeneca is apparently much less popular in Berlin than known. There are currently 100,000 doses of the British-Swedish preparation in stock – and further deliveries are expected. According to Tagesspiegel information, doctors and Senate officials also fear that the Astrazeneca skepticism will hardly be able to be dispelled in the foreseeable future.

As an indication of this, vaccinators and officials from the health administration cite that particularly among middle-aged, working Berliners there were particularly great concerns.

Recently, en masse teachers, police officers and daycare staff should have come to the vaccination centers where Astrazeneca is injected: the former Tegel and Tempelhof airports. But there were thousands fewer than expected by the Senate and vaccinators.

According to Tagesspiegel information, a million so-called vaccination codes have been sent since December 2020. This means the right to be vaccinated. But by March 23, only 362,711 Berliners had an initial vaccination, which means that around 630,000 Berliners are currently entitled to be vaccinated – but have not done it.

The administration of Health Senator Dilek Kalayci (SPD) could not be reached. What is certain is that many of those currently eligible for vaccination have not yet been able to make an appointment, for example because the Senate hotline was overloaded, because they only received the code in the last few days or because they did not react immediately.

Kalayci appeals to Berliners to get vaccinated

There are also appointments that are firmly booked for the next few days, i.e. Berliners who will soon be vaccinated. But, as those familiar with the process report, there are an estimated 300,000 men and women left who did not make an appointment for a vaccination.

This should annoy all those who have been trying to get vaccinated for weeks. Because the vaccination sequence has so far been adhered to by the Senate – despite complaints from chronically ill Berliners who would also like to be vaccinated with Astrazeneca. In addition, the invitations for the 70 to 74-year-olds were stopped a few days ago because there was too little vaccine from Biontech and Moderna – at that time the Astrazeneca agent was not yet approved for older people.

Senator Kalayci has repeatedly appealed to Berliners this week to get vaccinated: The Easter holidays are a good opportunity to take advantage of the offer. Please all teachers who have recently been invited to book an appointment quickly, said Kalayci.

Serious side effects after corona vaccinations are rare exceptions. The Paul Ehrlich Institute responsible for safety spoke of a rate of 0.3 per 1000 vaccine doses. By March 19, 14 suspected cases of Astrazeneca operations had been reported, two patients died – with two million vaccinations nationwide with the British-Swedish agent.

Astrazeneca is also used to vaccinate a lot at the Charité in Berlin: Almost 14,500 of the 19,000 employees at the university clinic have already received the first dose, 70 percent of them with Astrazeneca.

Lieferando & Co .: Restaurants prefer to deliver themselves because of... 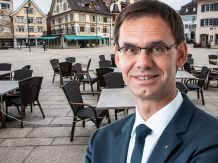 Vote for gate hunting: VGT reports over 4,000 signatures in one...

No easing: Corona break will last at least until March 7th