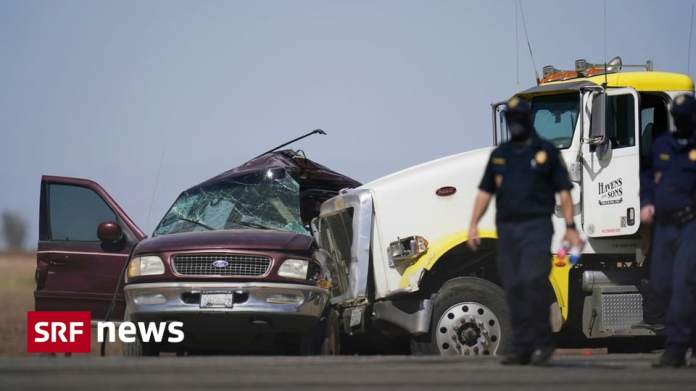 Police said it was unclear what caused the accident between the completely overcrowded SUV and a gravel-laden semi truck on the highway.

According to a police spokesman, numerous people were thrown out of the vehicle, others had to be freed from the crushed car by helpers.

. The off-road vehicle was a Ford Expedition that normally seats eight people. The overloading of the vehicle made it more difficult for the driver to control it, according to the authorities.

Several people were taken to hospitals, some with serious injuries. According to the information, the driver of the car, a man from the Mexican border town of Mexicali, is among the dead. The driver of the truck was injured, it was said.

“There were an unusual number of people in the car, but we don’t know who they were,” the authorities said. So it could be farm workers.

The cause of the accident is being investigated

The car collided with the truck at an intersection, said a police officer. It is unclear whether the car had previously stopped at a stop sign. The cause of the accident is still being investigated.

10 cities and their districts: where in Germany it is worth...

Hitman 3 in the test: the crowning glory of the trilogy?...

Coronavirus – draft for hard lockdown in Germany from Wednesday

“Boundaries to bodily harm”: Other parties outraged about corona violations by...

Tears, screams and Co .: How did the jungle show start?