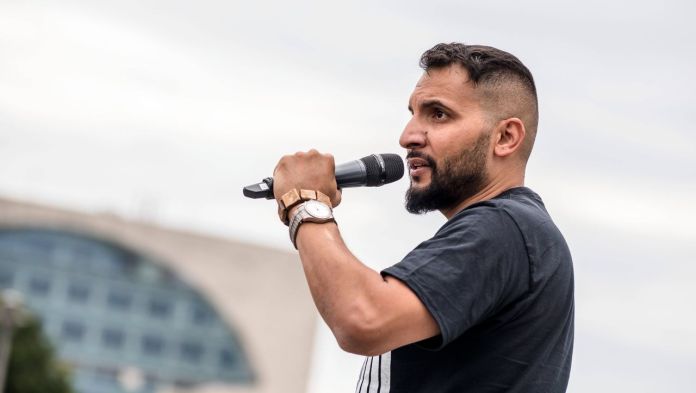 According to the Berlin Public Prosecutor’s Office, the conspiracy ideologist Attila Hildmann is currently in Turkey. An arrest warrant for the urgent suspicion of sedition could not be carried out, announced the authority. This is also »not to be expected« in the near future. Especially since Hildmann has Turkish citizenship in addition to German. As a rule, Turkey does not extradite its own citizens.
In the preliminary investigation against the 39-year-old, the Berlin prosecution checked more than a thousand statements. In addition to the suspicion of sedition, it concerns the suspicion of public incitement to criminal offenses and resistance to law enforcement officers.
Formerly known as a vegan cookbook author, Hildmann calls himself “ultra-right” and a conspiracy preacher. He had appeared repeatedly during protests against the corona protective measures. There and on his Telegram channel he spread massive, often anti-Semitic agitation. He said of the former Green Party member Volker Beck: “For Beck, as future Chancellor, I would reintroduce the death penalty by kicking eggs in a public place.”
The police in Brandenburg had initially secured Hildmann’s evidence during a search of the apartment. In December, a court order in Berlin obtained that the public prosecutor’s office could evaluate several laptops, cell phones, memory cards and USB sticks.

The investigations were bundled in Berlin. Justice Senator Dirk Behrendt (Greens) justified this with effective criminal prosecution. Several preliminary investigations from Brandenburg had therefore been handed over to the authorities in the capital.

Survey: Majority supports the closure of ski resorts – Germany and...

Stuttgart: More insults and provocations in the state parliament | ...

Corona pandemic: Africa is gearing up for vaccination campaigns

RB before the next step: Bayern hunters are still fighting idle