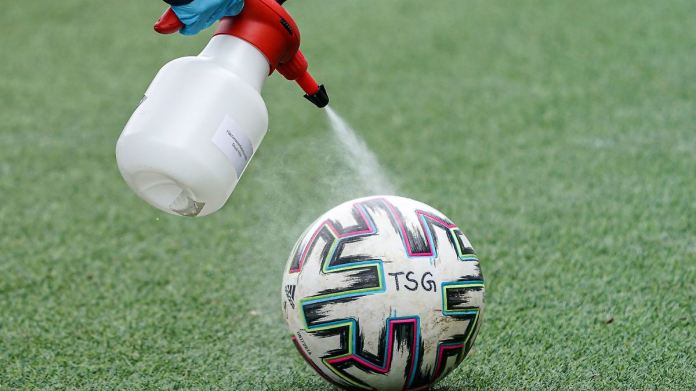 The DFL is reacting to the increasing number of corona cases in the second Bundesliga and tightening the hygiene concept. This now also provides for a so-called “quarantine training camp” for all 36 professional clubs. According to information from the “kicker”, the measure could be implemented earlier than expected.
The German Football League (DFL) is already considering a “quarantine training camp” for all professional teams in the 1st and 2nd Bundesliga before the end of the season. A corresponding four-page circular to all 36 professional clubs should be available to the “kicker”. The aim of the mandatory measure from April 14th to 26th is to “additionally safeguard” the three game days 29, 30 and 31 in the English week, DFL chairman Christian Seifert and chairman Ansgar Schwenken are quoted as saying. According to the specialist magazine, they further stated that there was a noticeable tendency among the health authorities to “send professional football teams into quarantine”.

It was only on Tuesday that the DFL announced that the hygiene concept would be tightened again. The “quarantine training camp” is one of the resolutions made in it; one of these had already existed before the restart in May 2020. The clubs were obliged to completely isolate themselves from the outside world for several days. In consultation with the “Football Commission”, the Presidium can make the measure mandatory for all 36 clubs in the 1st and 2nd Bundesliga. This should be done eight days in advance.

In addition, mandatory rapid antigen tests are to be carried out on every training and travel day from April 1 at locations with a seven-day incidence of over 35. The football professionals should be tested even more closely. Nothing should change about the two PCR tests per week.

With these measures, the DFL is responding to the recently increasing number of corona cases in the 2nd division. There were several teams in quarantine with Jahn Regensburg, Würzburger Kickers, Hannover 96 and Holstein Kiel and several game cancellations were made. The additions to the concept are intended to increase protection against infection and ensure that gaming operations can be carried out. In addition, the lack of compliance with the hygiene measures within the league was increasingly met with criticism.

Corona – Herber loss: The Hotel Lenzburg is a Covid victim

“The Flamingo” on “The Masked Singer”: Fans recognize YOU immediately

A second life in the forest: Christmas tree doesn’t have to...

Dakar Rally loses next favorite, Walkner continues to catch up

Tampa Bay Buccaneers: These players will become free agents in 2021