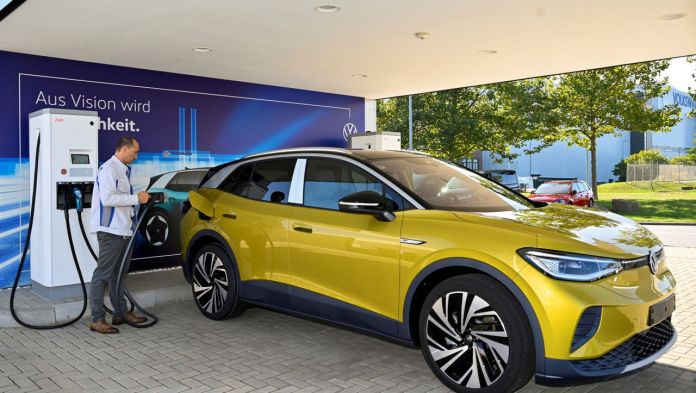 After a decline in sales and profits in the Corona year 2020, Volkswagen now wants to generate significantly more profit again. As the management around CEO Herbert Diess explained on Tuesday at the presentation of the 2020 balance sheet, the world’s second largest automotive group is aiming for an operating return at the upper end of the forecast range of between five and 6.5 percent for this financial year. In the following years it should be “as quickly as possible” seven to eight percent.
In 2020, the operating return on the group had fallen from 6.7 to 4.3 percent. In the past fiscal year, VW group revenues shrank by almost twelve percent to 222.9 billion euros – and operating profit by 43 percent to 9.7 billion euros. This emerges from the now published annual report. The group had already announced the first key data at the end of February.
After all, VW managed to turn things around for the better with a strong second half of the year. In the first six months of 2020, the group had posted an operating loss of 1.49 billion euros.

VW delivered a good 9.31 million vehicles to customers worldwide, 1.67 million fewer than in 2019. The company attributed this “almost exclusively” to the pandemic and the measures taken to contain it.

Diess described the performance in the crisis year 2020 as good. Business recovered quickly, especially in China, VW’s most important sales market. The Group’s core brand VW Pkw made it into the profit zone with a strong second half of the year. Before interest, taxes and special items from the diesel affair, the annual report for the brand showed a profit of 454 million euros. After the first half of 2020 and the slump in the Corona crisis, the brand with the VW logo had accumulated an operating loss of 1.5 billion euros.

Now the strategy of the same platforms and components, which the group initially used for cars with combustion engines and then for e-cars, is to be expanded to include software and battery technology. This should further reduce costs. At the same time, VW wants to accelerate the transition to a mobility service provider that also offers self-driving vehicles.

The slump in profits is not so noticeable in Diess’ income. According to the annual report, the 62-year-old will receive total remuneration of 7.7 million euros for 2020: just under 700,000 euros less than in the previous year.

The annual bonus for Diess, which is based on the operating result and the return, has halved to around two million euros. At the same time, however, the top manager earned 1.8 million euros in variable remuneration, which he received for the first time from the change in the remuneration system. That is three times more than Diess received in 2019 in back payments from deferred bonus payments.

In the remuneration system that was revised in 2017, VW uses the share price and earnings per share for the past three years as the basis for the long-term bonus. The total remuneration also includes pension benefits of almost 1.6 million euros.

When will the vaccinations against Corona finally start in Berlin? ...

Prepare Germany for the next pandemic now

Semperit in corona year 2020 with profit and sales records

Land Rover Discovery: Out and about in a seven-seater SUV