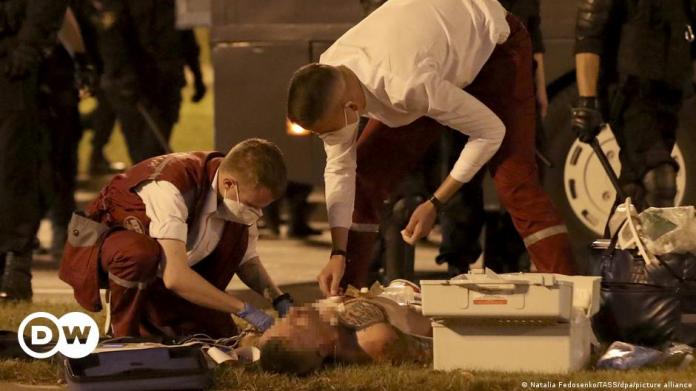 “I was injured near the place where Alexander Taraykovsky was killed,” says Grigory, trying to smile. Alexander Tarajkovsky was the first protester to die in Minsk and whose death was officially confirmed by the authorities. It is difficult for Grigory to smile because the right half of his mouth has been less mobile than the left half since his injury. Almost, he says with an ironic undertone, he too went down in the history of Belarus.

It is a miracle that Grigory can still joke, because after a traumatic brain injury, his chances of survival were only 20 percent, according to the doctors. For security reasons, Grigory does not want to reveal any details about his injury or his real name. Today he is in Germany and is being treated in a clinic. But what actually happened to Grigory in August 2020?

Grigory: “As if all of Minsk were on the street”

On that warm summer evening in Minsk, Grigory went to a peaceful action after work. People gathered in the city to take a stand against the rigged presidential elections. “That couldn’t be called a rally, people just stood around. There were a lot of people. I had the feeling that all of Minsk was on the street. The internet was switched off and people came out of their houses.

It was like being in a stadium at a game, “says the young man. Then the police came, started to drive the demonstrators away and they then fled to a nearby shop. He left it shortly afterwards he doesn’t remember anything.

Grigory woke up after a week in a coma in an intensive care unit in Minsk. Because of his injuries, he had to be operated on eight times. He was in the hospital for about four months. Initially, his right leg and one arm were paralyzed. He couldn’t move the right side of his face either, and he couldn’t speak. He can now do this again, although it is difficult for him to pronounce some words. “How old am I? I sometimes forget numbers because of the aphasia. Oh yes, 29,” he finally says.

An ambulance in Minsk surrounded by protesters on August 9, 2020

For rehab in Germany

The young programmer has always been interested in politics. But he never expressed his beliefs out loud. “It was the first time that I had even participated in the elections. I voted for Svetlana Tichanovskaya. I knew the elections would be rigged, but I wanted those who count the votes to see how many people are against it, “emphasizes Grigory.

He still cannot move his right arm properly. He cannot type on a keyboard or lace up his shoes either. But he was lucky overall, he thinks.

“He has remained himself. When he came to, he asked for headphones, a tablet and an e-book,” his relatives recall. Six months after the injury, Grigory flew to Germany for rehab. In the hospital, physical and occupational therapists take care of Grigory so that he can regain full control over his body.

Belarusian diaspora is helping in Germany

Volunteers from the Belarusian diaspora in Germany help organize the treatment of Grigory. Among them is the IT manager Elisabeth, who comes from Belarus and has lived in Germany for over 20 years. “After the events in August, like many others, I just had to do something. I couldn’t work, sleep, or eat,” she says. “I always had to watch the news. The best medicine in such a condition is to take action yourself.” Elisabeth met like-minded people through solidarity rallies with Belarusians in Germany and on the Internet. They organized a group to organize medical aid for injured Belarusians.

Elisabeth says that at first everything seemed very difficult to them: Due to the COVID-19 pandemic, entry into Germany is restricted not only for tourists, but also for patients. In order to obtain a visa, a clear diagnosis is necessary, which is difficult to make from a distance.

Gradually, however, the group managed to establish contacts – both with patients in Belarus and with the German embassy in Minsk. The diaspora and the human rights organization Libereco helped raise funds for Grigorij’s treatment. Protests against the government in November 2020

The Federal Foreign Office confirmed to Deutsche Welle that it was promoting measures for the treatment and regeneration of victims of state violence and torture in Belarus. “This also includes appropriate procedures for entry into Germany,” said the German Foreign Ministry.

The then Belarusian Interior Minister Yuri Karayev apologized in August 2020 for the fact that “passers-by” who were not involved in the demonstrations were injured during the police operations. However, something like this happens every time there is a mission against a collective violation of public order.

According to the human rights organization Viasna, more than 25,000 people were arrested between August 9 and the end of 2020 – most of them were released conditionally and received either a fine or a prison sentence of 10 to 15 days.

Another Belarusian who received a visa for treatment in Germany is Vladimir. His name has also been changed for security reasons. His ordeal began after meeting friends when he was waiting for a taxi on the street in Minsk. He wore a sports jacket with the historic Belarusian coat of arms “Pahonja”, which is now a symbol of the protest in Belarus. This coat of arms was to be his undoing. Because the white and red coat of arms stands for the opposition in Belarus. “Policemen, about seven people, in helmets and with machine guns, came up to me without asking anything. I had to get on my knees,” he says. Then they broke his arm and he passed out from the pain. “When I came to, an ambulance drove up to take me to a clinic. It turned out that my shoulder was broken. I had an operation and a plate was inserted. I couldn’t move my right arm at all at first “he says.

After his discharge from the hospital, Vladimir learned that two proceedings had been initiated against him – for hooliganism and for disobedience to the authorities. He refused to plead guilty. As his court dates were postponed, Vladimir used the time to leave the country fearing repression. But also out of concern for his injured arm, he wanted to get out of Minsk. Volunteers from “Razam” – a community of Belarusians living in Germany – support him. So he quickly got a humanitarian visa for Germany.

“Not just therapy for patients”

The young man is still visibly shocked that the coat of arms on his jacket was the reason for the brutal crackdown on him. “At that moment I had even forgotten that I was wearing this jacket. I hadn’t thought of the country in which I lived that something like this could provoke such aggression,” he says. Vladimir hopes to extend his visa and continue the outpatient treatment in Germany: “I am a positive person and I have the feeling that my arm is on the mend.”

The volunteers in Germany hope that they will be able to help not only Grigory and Vladimir, but also other Belarusians affected by police violence. “Unfortunately, our help is still needed”, says Elisabeth and adds: “This is not only therapy for our patients, but also for me personally, because I realize that I can do something useful and help people.”

Grosjean ends the season – and probably the career too

Mega trial as a declaration of war against the most powerful...

Dissatisfied with treatment: man shoots around in US clinic – a...