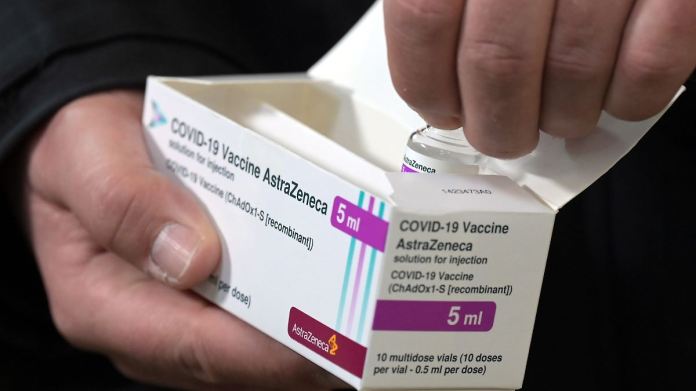 First, the Standing Vaccination Commission recommends the Astrazeneca vaccine only for under 65-year-olds in Germany. After that, the vaccine is suspended for everyone, but only for three days. Now the Stiko is using new data on thrombosis and, according to a report, changes its recommendation.
The Standing Vaccination Commission (Stiko) apparently recommends the corona vaccination with Astrazeneca in view of the “available, but still limited evidence” only for people over 60 in Germany. According to the “Augsburger Allgemeine” in a draft resolution, the British-Swedish vaccine should only be possible for people who are under 60 years of age at the discretion of a doctor. “Their use below this age limit, however, remains possible at the medical discretion and with individual risk acceptance after careful explanation”, explains the commission in the paper.

In Berlin and Munich, the vaccine for under 60-year-olds has already been suspended. Berlin Health Senator Dilek Kalayci called the decision a “precautionary measure”. In view of the new data on side effects, the Berlin University Hospital Charité initially suspended vaccinations for employees under 55 years of age. By noon yesterday there were 31 cases of sinus vein thrombosis reported to the responsible Paul Ehrlich Institute after the vaccination at Astrazeneca. Thrombocytopenia was also reported in 19 cases.

The SPD health expert Karl Lauterbach advocates putting the Astrazeneca vaccinations for everyone under 55 years of age in Germany to the test. “Based on the data, it should be checked once again to limit the vaccination with Astrazeneca to people over 55 years of age for the time being,” he told the “Rheinische Post”. The SPD politician recently criticized Health Minister Jens Spahn from the CDU for suspending the vaccination for three days after the first suspected cases until an examination by the European Medicines Agency (EMA).

There should be three months between the first and second dose of the Astrazeneca vaccine. “With regard to the second vaccine dose for younger people who have already received a first dose of the Covid-19 Vaccine AstraZeneca, the Stiko will comment by the end of April,” the newspaper said in the report. Until then, the Commission would like to check whether a second vaccination with an mRNA vaccine, such as that from Biontech / Pfizer, is possible.

This is not the first time that the vaccine, developed by researchers at Oxford University in London, has hit the headlines. Initially, the vaccine was only approved for people under 65 years of age in Germany due to a lack of data. Only recently, theoretically everyone in Germany should have been vaccinated with the Astrazeneca vaccine – but then there were more cases of various thromboses and vaccinations with the British-Swedish preparation were suspended for a few days.

Finally, the European Medicines Agency (EMA) checked a connection between the thrombosis cases and the syringe. But the vaccine quickly got the green light again. “The vaccine is safe and effective against Covid-19, and the benefits are far greater than the risks,” said EMA chief Emer Cooke.

Man is said to be in psychiatry after fatal knife attack

The pumpkin head is also paying a visit to the PS4

Dakar Rally, 3rd stage: Walkner with the anger in his stomach...

Diego Maradona: Singer Henning May mourns, then he rows back