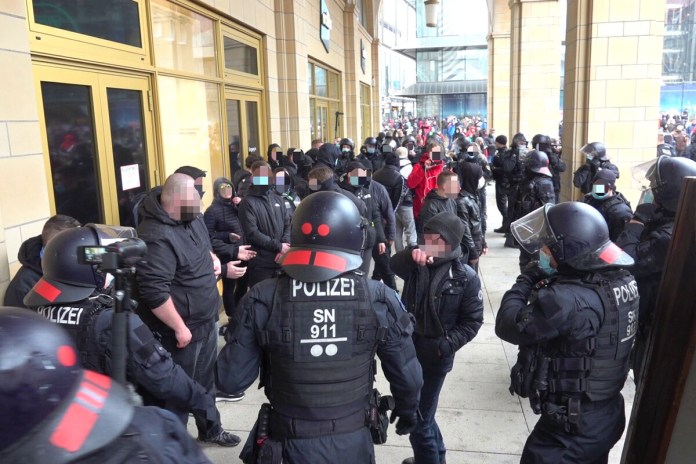 After the Corona demo ban in Chemnitz: police officers attacked!

In Chemnitz, there were wrangling between corona demonstrators and the police on Saturday. Apparently bottles also flew at officials!

According to a dpa reporter, bottles were thrown at officials. The attackers were around 20 people, but the number was much larger.

When asked, the police initially had no information on the extent of the attacks. It was said that there was briefly a “dynamic” in the incident. But that only lasted a few minutes. There was also talk of throwing bottles on Twitter.

A rally by critics of the Corona measures was banned by the city on Saturday, as was a counter-demonstration (TAG24 reported).

Update, 5:25 p.m .: According to the police, a bottle and a bag were thrown at officers. One policeman was slightly injured.

The bottle thrower (29) could also be identified, said a police spokeswoman. The 29-year-old German also showed the Hitler salute, according to the police. He now has to answer for assaulting law enforcement officers and for using marks from unconstitutional organizations.

The police are now investigating another German (22) because he is said to have pushed an officer. The policeman was not injured.

In addition, there were a number of reports: “As of today, a total of 40 administrative offense and five criminal reports have been recorded,” said the police.

The police had prepared for a mission regardless of the outcome of a legal dispute. The officers received reinforcements from colleagues, among others Thuringia and Baden-Wuerttemberg.

19 – President of the Federal Constitutional Court criticizes the use...

Graz99ers with a failure and a comeback! – Hockey-News.info

Top teams ZSC and Lausanne win – a dozen goals in...