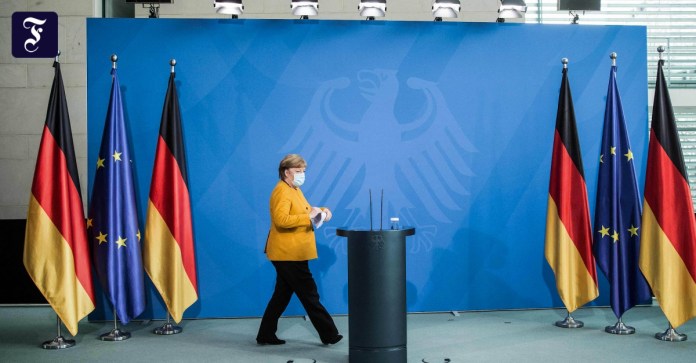 IIn the constitutional law department of the Federal Ministry of the Interior, there was still a whirlwind on Wednesday morning. The Easter rest raised many questions: Are there Sunday surcharges on Maundy Thursday, is there a driving ban for trucks? How can the bureaucratic effort for the economy, where there is already great displeasure, be kept within limits? The order of the Prime Minister’s Conference on Monday was tough. Quite a lot of hassle for two extra days of people staying home so the virus doesn’t spread as quickly. The headlines after the meeting of the Bund-Länder-Round were devastating. The officers racked their brains for a day and a half. You were just on the last few meters when suddenly it was said: Command back, Easter rest canceled.

Chancellor Angela Merkel (CDU) answered the microphone in the Chancellery on Wednesday at 12.30 p.m. sharp. Their message, the content of which had already been leaked, was short but spectacular. Merkel simply withdrew the only really new point in the Corona fight that she and the prime ministers had decided. “To put it bluntly: the idea of ​​an Easter hatdown was designed with the best of intentions,” said Merkel. Because you have to “absolutely manage” to slow the third wave of the pandemic. “Nevertheless, the idea of ​​the so-called Easter rest was a mistake.” In the short time it was available, it could not be implemented well enough “if it can ever be implemented so well that the cost and benefit are in a reasonably reasonable relationship”.

That was a bummer, especially since Merkel had no alternative proposal in her pocket. But the bigger bang was to follow. Merkel introduced it with the second “clear and simple” in her appearance, which lasted only a few minutes: “This mistake is solely my mistake. Because in the end I have the final responsibility for everything – qua office it is so – including for the decision made on Monday on the so-called Easter rest. ”Merkel had previously communicated it to the prime minister in a surprising video conference and also to the chairmen of the parliamentary groups in the Bundestag. “A mistake has to be named as a mistake, and above all it has to be corrected – and if possible it has to be done in good time.”

Admitting mistakes is not exactly one of Angela Merkel’s favorite disciplines. Not that she never did. For example, in September 2016 she said she would like to turn back time so that she could have better prepared for the refugee crisis. But Merkel is actually known the other way around. In the late summer of 2015, she said about her behavior in the face of the large influx of refugees: “I have to be honest, if we start to apologize for showing a friendly face in emergency situations, then this is not my country.” was defiant, not humble.

The Chancellor must already perceive the current pressure in the Corona crisis as enormous if she decides to take a step like the one on Wednesday and even a press statement half an hour before a questioning in the Bundestag, in which there was an opportunity to publicly admit errors gives. However, the pressure is also great.

Results presented for the first time: Oxford vaccine is safe

How safe is Germany going into the super election year?