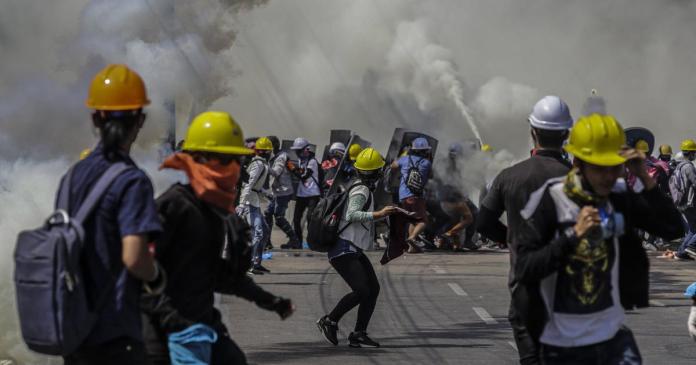 In Myanmar, the military once again cracked down on protesters. In Yangon, the largest city in the Southeast Asian country, security forces fired tear gas and stun grenades on Saturday to disperse protests against the military coup a month ago, local media reported. Information on victims was not available.

There were also demonstrations in the southern city of Dawei demanding the release and reinstatement of de facto Prime Minister Aung San Suu Kyi. Just a few hours earlier, the UN special envoy for Myanmar, Christine Schraner Burgener, had urged the United Nations Security Council to take decisive action against the junta. The military rulers would have to be put in their place.

The US and some other western countries have already imposed limited sanctions on the junta. The EU recently put development aid money on hold for the country. The independent UN human rights commissioner for Myanmar, Thomas Andrews, has called for an arms embargo and targeted economic sanctions.

However, diplomats consider UN sanctions against the military rulers to be unlikely in the near future, as such measures would probably be rejected by the veto powers China and Russia. China’s UN Ambassador Zhang Jun urged all sides in Myanmar to exercise extreme restraint.

China does not want any instability or chaos in its neighboring country, he said after the Security Council meeting, which ended without an agreement on a joint declaration.

Meanwhile, Myanmar asked India to extradite eight police officers who had fled to the neighboring country. According to Indian information, the police had sought refuge because they refused to obey instructions from the military government. The authorities in Myanmar have now issued a letter demanding their arrest and extradition “in order to maintain friendly relations between the two neighboring states”.

Myanmar has been in turmoil since the military coup on February 1, and the security forces are increasingly cracking down on the ongoing mass protests. According to the UN, more than 50 demonstrators have been killed and around 1,700 people arrested.

The King of Fighters 2002 Unlimited Match – available now on... Round2 Capital from Vienna invests in Swiss EdTech Avallain