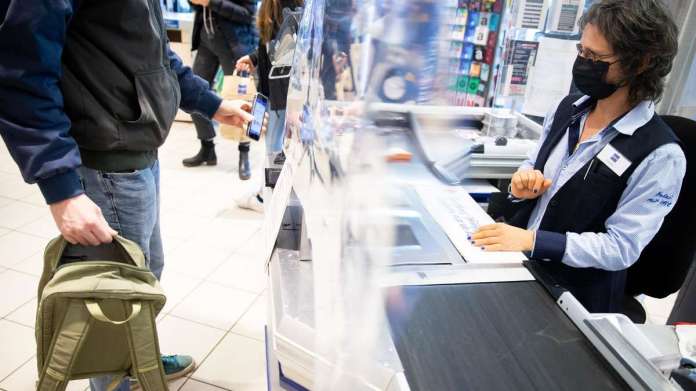 Technological progress is also making its way into supermarkets. Experts warn that Aldi, Lidl and Rewe will soon have to adjust to some changes.

Munich – Since last year, there has also been an increasing number of options for contactless payments with cell phones or cards in Germany. This technology is especially critical for supermarkets, as retailers need to be extra careful with their customers at the checkout. Supermarket experts are now warning Lidl, Aldi, Rewe and Co not to keep an eye on another time rule.

Aldi, Lidl and Rewe: This time rule is crucial for the checkout process

“15 seconds – that shouldn’t take longer, especially with the young generation, who are spoiled for speed,” said the trade expert of the German Future Institute, Theresa Schleicher dpa. The less time the payment process takes, the less annoyed customers are. Accordingly, Lidl, Aldi, Rewe and Edeka should pay particular attention to optimizing their payment processes in order to win over customers.

Discounters like Lidl and above all Aldi are already setting a good example here. According to a survey by the market research company Ematrix from 2009, Aldi is far ahead of all other supermarkets with 86 customers cashed per hour. With 71 customers, Lidl follows in second place

Aldi, Lidl and Rewe: Germany is catching up with contactless numbers

In China it is widespread to pay using facial recognition. “The facial expressions you need to make payments are a smile,” said Schleicher at the presentation of her Retail Report 2020. In Germany, contactless payment did not catch on for a long time. However, due to the corona pandemic, contactless payment methods with cards or smartphones have also become more popular in this country.

“According to a representative Bundesbank survey in 2020, cashless means of payment and especially cards have become significantly more important in everyday spending,” said Burkhard Balz, the board member responsible for cashless payments at the Bundesbank. According to the survey, almost a third of all purchases in retail and online retail were paid for with cards. An increase of 9 percent compared to 2017. “More than a fifth of those surveyed who paid contactlessly tried this out for the first time during the corona pandemic,” said Balz. Many of the respondents would prefer to use contactless payment methods for hygienic reasons.

In the meantime, Aldi is changing its system for cashing out – with consequences for customers as well. (phf)

“It’s not fair”: Thomas Gottschalk takes the ProSieben show away from...

Corona News: RKI President: “The numbers are still too high” –... Misfortune at a Bolivian university: Seven students fall to their deaths

19 – Drosten: New coronavirus variant not yet in Germany