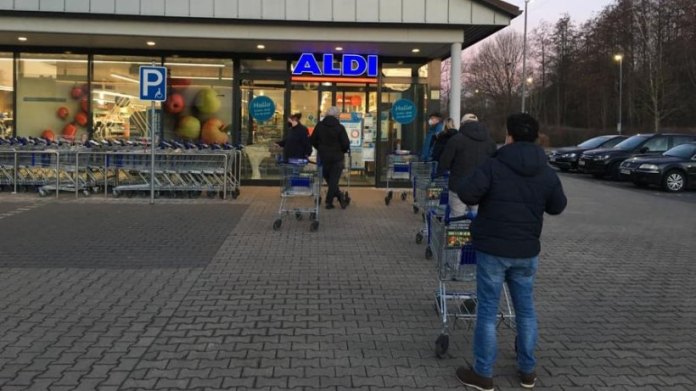 Aldi wants to sell corona tests – that ends in disaster

It is shortly before seven o’clock on a Saturday morning and the sun is slowly rising over Dortmund. Actually a nice picture.

But instead of jogging through the fields at this time or maybe just sleeping, I stand on one Aldi-Parking spot.

The discounter wants to sell corona rapid tests for home use from 7 a.m. Five tests are said to be 25 euros Aldi costs. A top price. That’s why around 20 people are standing in front of the Aldi branch in Dortmund-Brackel at exactly seven o’clock.

“Almost like the PC back then,” jokes a customer standing next to me. But disillusionment follows at the checkout. “Unfortunately, we haven’t received any tests yet,” explains the branch manager. When and whether tests can be expected on Saturday at all? Not clear.

Aldi: Tests sold out after a few moments

And it doesn’t look any better at the next Aldi in Dortmund-Körne at 7.15 a.m. According to the saleswoman at the checkout, you only got 15 or 20 tests. And they were sold out after a few seconds. Many customers would have queued and waited before the store opened. When will tests be delivered? Here too: unclear.

Aldi: Now it’s out! Discounter will sell THIS popular product from Saturday

Aldi: secret function! Hardly anyone knows what the carpet in front of the discounter is really for

“That is impossible. Incredible, ”mumbles a customer who is just putting his shopping cart with the others without having achieved anything. He’s right somehow. With the big promises of the discounter, one could really have expected more.

From Monday, new corona rules will apply in NRW. You can read what these are here.

Why Felix Brych withdrew from his penalty whistle

Corona pandemic: Lockdown from Wednesday – the federal and state governments...

Werder Bremen: personnel alarm! TSG Hoffenheim are running out of...

Martin Kocher sworn in as the new labor minister