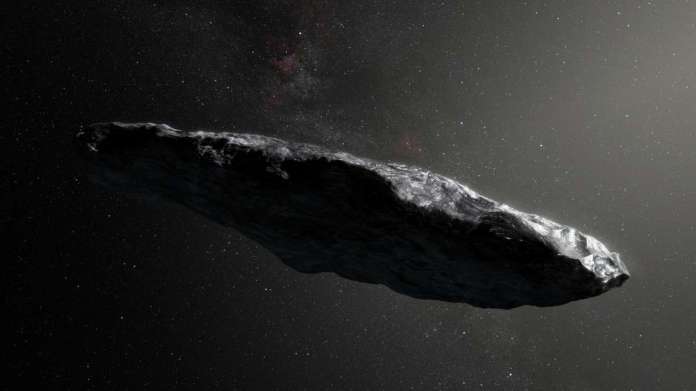 The mystery of the celestial body “Oumuamua”, which was discovered years ago, seems finally solved. So far there has even been talk of a mysterious alien object.

Arizona – Since a mysterious celestial body, later to be named “Oumuamua”, was first sighted in October 2017, it has caused a sensation. The unexpected visitor from the depths of space inspires space explorers all over the world. Because never before had an interstellar object in our solar system been observed by a telescope. The theories about “Oumuamua”, which translates from the Hawaian ambassador, were varied. Due to the unusual trajectory and light weight, researchers working with Abraham Loeb from the Harvard Smithsonian Center for Astrophysics in Cambridge (USA) came to the spectacular conclusion that Oumuamua must be some kind of alien object.

But not an alien spaceship: the mystery of the mysterious celestial body “Oumuamua” seems to have been resolved

Now two US physicists from Arizona State University seem to have solved the riddle of the 400-meter-long spear-shaped chunk “Oumuamua”. In the “Journal of Geophysical Research” the two researchers Steven Desch and his colleague Alan Jackson present their thesis on the origin of the spectacular celestial object.

Celestial body “Oumuamua”: Researchers assume a piece of an exo-Pluto

“Oumuamua may be the first sample of an exo-planet,” said the article published on March 16. “We can identify it pretty precisely as a piece of an exo-Pluto, a Pluto-like planet in another solar system,” explains Desch. According to the astrophysicists, this assumption can also explain the extraordinary properties of the object, which do not really fit either a comet or an asteroid. Such as the Pluto-like surface made of solid nitrogen and the accelerated movement.

“Oumuamua ‘was probably ejected from a young star system about half a billion years ago,” it continues. Jackson assumed that Oumuamua only got its strikingly flat shape when it entered our solar system. During its close encounter with the Sun, the exo-Pluto presumably melted into a splinter, losing more than 90 percent of its mass. Loeb’s alien thesis in connection with “Oumuamua” thus seems to be off the table. In the riddle of a mysteriously shining star, however, scientists still have to get involved with alien theories. Dark energy, discovered in 1998, was also a source of fascination. But now a new theory contradicts the discovery, which brought in a Nobel Prize. (va)

Kaufland in Munich: Meat discovery makes waves – “People are the...

50 years ago: The patent for LCD is applied for

Trump continues to see himself as a winner at the rally...