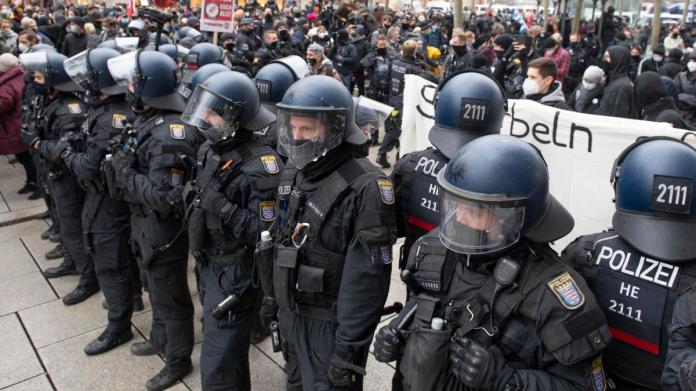 Mass demonstrations, riots and vandalism: the number of civil unrest is increasing worldwide. In a current risk analysis, the insurer Allianz assumes that the situation will worsen due to Covid-19. The experts expect violence to become institutionalized.

Mith pepper spray and batons, the police had to defend themselves against a number of violent “lateral thinkers” demonstrators last weekend. She even arrested some of them. The riots in Kassel gave a foretaste of what Germany could expect in the next few months.

Whether demonstrations against the German corona policy, Black Lives Matter protests in the USA or arson attacks on cell phone towers in Great Britain: the number of civil unrest is increasing worldwide. One trigger is the spread of Covid-19. And experts assume that the pandemic and the associated restrictions for society could fuel the violence even more in the future. This is underlined by a current analysis by Global Corporate & Specialty (AGCS), Allianz’s industrial insurer, which WELT will have before publication.

“Unfortunately, the risk of unrest and violence due to Covid-19 is likely to increase,” says Björn Reusswig, an expert in insurance against political violence. “The measures governments have taken to combat the coronavirus have a significant socio-economic impact and frustration is growing in large sections of the population.”

He is alluding to the exit and travel restrictions, but also the numerous closings that have triggered a severe recession in almost all countries and hit certain sections of the population particularly hard. Most of the demonstrations take place in the centers of large cities. In particular, shops and branches in the city centers are suffering from the riots. Shops have to close, customers stay away, and the activists sometimes plunder or riot.

The annual risk survey conducted by Allianz among numerous global companies shows how much companies are concerned with this risk. In 2021, “political risks and violence” returned to the top 10 risks for the first time since 2018. According to Verisk Maplecroft, a research firm specializing in global risk analysis, there will be significantly more protests in 75 countries by the end of 2022. In more than 30 of these countries – especially in Europe and America – there is likely to be particularly strong unrest. This can be expensive for companies.

There is a risk of high sales losses

Last year, arson, vandalism and looting in connection with the protests following the death of George Floyd caused billions in damages. During the “yellow vests” demonstrations in France, the shops along the Champs-Élysées in Paris were looted and badly damaged, which drove the customers away. Not all shops were able to reopen immediately. A few weeks later, the French retail association reported that the stores had lost more than a billion dollars in sales.

The fact that the pandemic allowed conspiracy theories to flourish in parts of the population is of particular concern to Reusswig. That program future turbulence. Last year there was already a series of arson attacks on cell phone towers in Great Britain and other European countries. The perpetrators believed in an absurd theory, according to which the expansion of the 5G network is immediate with the spread of the corona virus. However, there is no scientific evidence for this.

Germany itself has so far been spared such violent attacks. There were also riots during the G-20 summit in Hamburg in July 2017, in which cars and shops were damaged – but according to the Association of the German Insurance Industry (GDV), these only resulted in costs of around twelve million euros. But Reusswig also believes that significantly higher damage is possible in the future. “Unfortunately, I cannot rule out that there will be much more violent riots in this country too,” he says. “Here too we see a trend towards institutionalizing violence,” says the Allianz expert.

“Covid radicalizes certain groups in society.” As long as the shops in Germany are more or less closed because of the pandemic, it shouldn’t matter too much whether the inner cities are cordoned off due to violent demonstrations. Nevertheless, according to Reusswig, there is a risk that the shops could be damaged. In addition: “If the shops can reopen in the next few months, they risk losing sales in the event of closures due to demonstrations. ”

It is the essence of an insurer to always be extra careful. You always have to keep an eye on all risks – also for self-protection. This is the only way they can calculate the policies in such a way that they can easily cover the costs in the event of damage. However, one reason for Reusswig’s pessimism could also be of a business nature. He also promotes special policies to mitigate the effects of strikes, civil unrest and civil unrest. “In the past, this coverage was seen by customers as ‘nice to have’ and by insurers as ‘nothing to be overly worried about’.

However, this has changed since 2018. We’re seeing growing interest and demand for political violence coverage from corporations, ”he says. But there is also positive news: while the dangers of civil unrest have increased, the number of terrorist attacks has fallen significantly in the past 24 months. However, according to Reusswig, it remains to be seen how long this will remain. Mostly it is about wave movements.

“Everything on shares” is the daily stock market shot from the WELT business editorial team. Every morning from 7 a.m. with the financial journalists Anja Ettel and Holger Zschäpitz. For stock market experts and beginners. Subscribe to the podcast on Spotify, Apple Podcast, Amazon Music, and Deezer. Or directly via RSS feed.

After the corona rule violation in cash now approved meeting

Young Muslim in France celebrates Christmas – and is attacked

Biathlon World Cup: top placement for Eder in the individual

AMD confirms USB errors on B550 and X570 motherboards