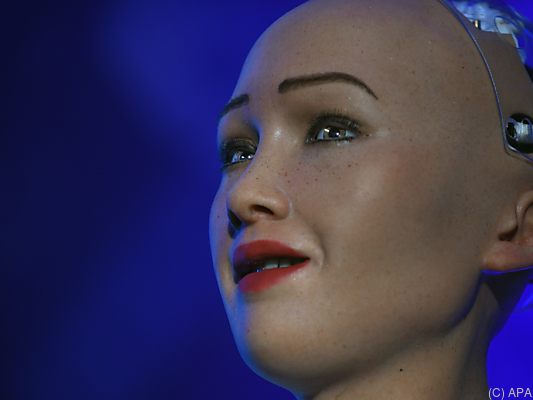 A self-portrait painted by the human-like robot Sophia has been auctioned for nearly $ 700,000. The buyer on the Nifty Gateway auction platform is a digital artist who works under the pseudonym 888. For $ 688,888 (currently around 582,600 euros) he got the picture that Sophia painted with a brush in her mechanical hand. This also included a short video that was digitally signed by the NFT.

NFT is currently experiencing a boom: a copy of a collage by digital artist Beeple with it was recently auctioned for a good 69.3 million dollars. NFT (non-fungible token) are something like digital certificates of authenticity, the authenticity of which is secured with the blockchain data chain of the crypto currency Etherium.

Sophia was introduced in 2016 by the Hong Kong-based company Hanson Robotics and has been seen at various conferences over the past few years. The robot is modeled on a human and tries, among other things, to imitate facial expressions when speaking. Hanson Robotics brought in the painter Andrea Bonaceto for the self-portrait project, as the company announced on Friday. Sophia painted her picture on a portrait of her previously made by Bonaceto. In the accompanying video, the two images merge.

Rent caps for the whole of Germany and guaranteed minimum income:...

These offers inspire us on Tuesday Karl Lagerfeld’s muse looks back on their time together