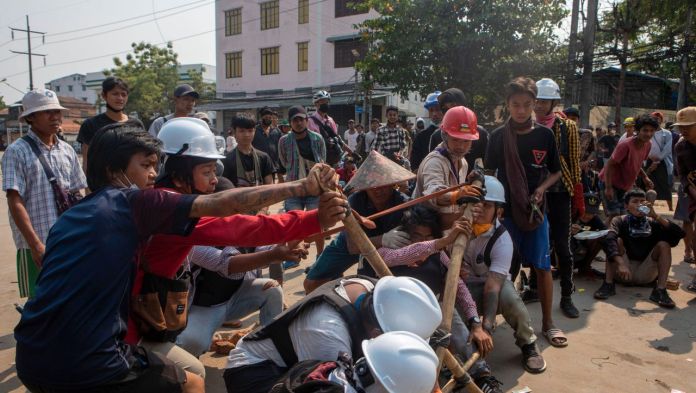 On the bloodiest day of the protests against military rule in Myanmar, almost 90 people were killed by security forces. “At least 89 people were killed by early evening,” said the local Political Prisoner Organization (AAPP) on Saturday. The news site Myanmar Now, quoted by the AP news agency, even counts at least 114 dead. On the occasion of a military parade on Army Day, the protest movement had called for new demonstrations.
“We receive reports of dozens of deaths, including children, a hundred injured in 40 locations and mass arrests,” said the office of the UN High Commissioner for Human Rights on Twitter. A spokeswoman even spoke of 91 dead, but the reports could not have been verified.

Particularly brutal scenes occurred throughout the Mandalay region. There, security forces opened fire on demonstrators and shot at least nine people in four different cities – including a doctor and a 14-year-old girl, as reported by rescue workers on site. “Four men were brought to us dead,” said a medic from Mandalay, Myanmar’s second largest city, as she tried desperately to treat dozens of injured people.

The security forces also opened fire on demonstrators in the city of Lashio in the Shan area on the border with Thailand and China and in the economic metropolis of Yangon. “The army and police just came and fired without warning,” said a local journalist in Lashio.

Diplomatic representatives reacted with horror. “This 76th Army Day will be remembered as a day of terror and dishonor,” said the European Union delegation in Yangon on the online networks. Killing unarmed civilians and children is inexcusable. The US Mission and Great Britain Foreign Secretary Dominic Raab made a similar statement.

Myanmar’s military demonstrated their strength with a large parade in the capital Naypyidaw that morning. Only eight foreign delegations attended the event, including China and Russia. According to a report by the Russian state agency Tass, Russia and Myanmar want to strengthen their relations. Both states wanted to expand military cooperation, said Tass. Fomin called Myanmar a “reliable ally and strategic partner in Southeast Asia and the Pacific”. Myanmar’s commander in chief, Min Aung Hlaing, said Russia was a “true friend,” according to the British BBC.
Russian media reported that in addition to Russia, countries such as China, India, Pakistan, Vietnam and Thailand had also sent representatives. Russia is reportedly the second largest arms supplier to Myanmar after China.

In a speech, junta leader Min Aung Hlaing defended the military coup on February 1. He stated that after new elections he wanted to hand over power to the then new government. At the same time, the general issued a warning to the junta opponents: “Terrorism” is unacceptable, he said. “The democracy we want” must be respected.

Since the military coup on February 1, the junta in Myanmar has faced massive and brutal protests. More than 2,600 demonstrators have been arrested since the protests began, and nearly 330 people have been killed, according to local human rights activists. The demonstrators are demanding, among other things, the release of the disempowered de facto head of government Aung San Suu Kyi and a return to the democratic process.

Two corona traffic lights on red – a quarter of the...

The Masked Singer: Show gets shorter, puzzles get more difficult

“When the music is playing” presents a special winter special in...

Deutsche Bank Supervisory Board and Wirecard Affair: “Get this newspaper done”