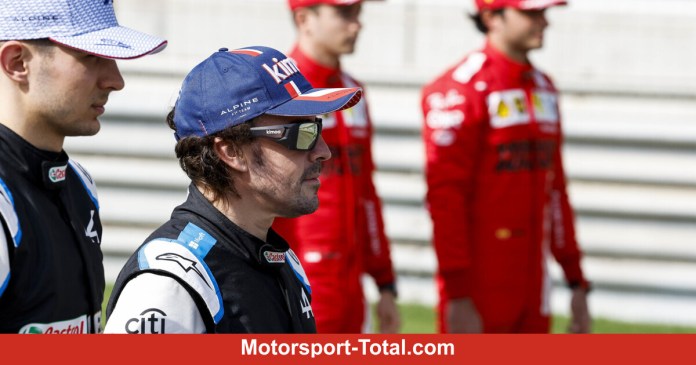 Alonso: I’m better than the competition

We want to hook up with Fernando Alonso right away. The Spaniard gave the ‘BBC’ an interesting interview. Although he does not expect “miracles” from Alpine this season, he still wants to be able to fight for victories again next year at the latest. “We want to be one of those teams that surprise everyone.”

But the competition is fierce, including among the drivers. “There are a few young talents who have shown great performances in the junior categories,” says the Spaniard. “Then on the other side there are the champions, with Lewis, Sebastian, Kimi and Verstappen, who, although he belongs to the younger generation, has been racing at a top level for four or five years.”

It will not be an easy task to beat everyone on the track again after a two-year break, says the two-time world champion. When asked whether he is still as good as the competition, he says: “No, I’m better.”

Speaking of videos and Mick Schumacher – I still have one thing for you! We talked to Haas team boss Günther Steiner about the German. But not only, because the video interview also talks about his fame, which he gained through the Netflix series. In keeping with the release of the third season of “Drive to Survive” last Friday!

You can find more Formula 1 videos on our Formula1.de YouTube channel! We also offer you even more motorsport content on our Motorsport-Total.com channel, including via MotoGP. It’s best to subscribe to both accounts at the same time 😉

In the interview, Günther Steiner expresses criticism of the Netflix deal, talks about Mick and Michael Schumacher and the truth about the broken deal with BWT More Formula 1 videos

Video: Mick looks ahead to his Formula 1 debut

In this interview, Mick Schumacher talks about the switch from Formula 2 to Formula 1 cars and his preparation for the Formula 1 debut on Sunday.

Mick “is very reminiscent of his father”

Of course, we have to think of Michael Schumacher and the year 1991 when the German made his Formula 1 debut. Next weekend it will be time for son Mick. He will fight against his father’s former competitors, such as Fernando Alonso and Kimi Raikkonen.

The Finn is looking forward to the duel and emphasizes in the ‘Sky’ interview: “I don’t think he’s in Formula 1 because of his surname. It’ll be exciting to watch. Hopefully he has a decent car.” And: “He reminds me a lot of his father.”

It remains to wish Mick that his debut goes better than that of father Michael. Because on the first lap of the race, the then newcomer retired in sixth place with a damaged clutch.

Recently a reader on Twitter (with the hashtag FragMST) asked us whether there are any new Formula 1 teams in sight. Unfortunately not, because there are currently no serious candidates. In addition, the entry barrier for new racing teams will be significantly greater, namely they have to put 200 million US dollars on the table.

That would have prevented former teams like Jordan from entering the premier class, says Eddie Jordan at ‘RaceFans.net’. “I think that’s fundamentally wrong.” The Irishman believes that the new hurdle would create a “cartel of the existing teams” and deter new prospects.

Lewis Hamilton and NFL star Tom Brady answered questions from James Corden. In this video made available to us by Sky, the two superstars talk about their passions.

Both are chasing the eighth title in their respective sport. What is it about? What so successful? Among other things, Hamilton talks about his superstitions – and why he never wants to play football …

Sergio Perez will contest his first race for Red Bull this weekend. The Mexican chatted in the podcast ‘Beyond the Grid’ about how the deal had come about, but also about his difficult previous year including the corona infection. “That was very difficult, that roller coaster ride last year.”

“At that time, Formula 1 still thought that everything was bulletproof. I was severely criticized – and that at a very delicate point in my career, of all places.” Because he had to pause both Silverstone races and was about to lose his cockpit at Racing Point.

As luck would have it, he was in quarantine in Milton Keynes, of all places, not far from the Red Bull factory. “When I went running properly for the first time after that, I noticed that Corona hit me harder than I thought.” It wasn’t until the race in Belgium several weeks later that he felt physically fit again.

Wolff: Can we “report back stronger”

“All in all, it was three difficult days of testing for us,” said Mercedes team boss Toto Wolff, beginning his preview of the season opener. The W12 was not as “stable and predictable” and was not as good on the track as some of the competition’s cars, says the Viennese.

Above all, he has Red Bull on the bill: “Red Bull looked strong on both longer and shorter attempts, but when it comes to test drives, of course, you don’t really know the real performance.” Now the world championship team has to “prove their ability to react” and show that they can fight back after the failed preparation in the first race.

“I know that we can report back stronger after a tough test,” said Wolff. That sounds almost like a little challenge …

Of course, after just three days of testing, it is extremely difficult to establish a pecking order. My colleague Christian Nimmervoll tried to do that with Kevin Scheuren. In the latest edition of our Zoom news format, the two of them disclosed their ranking before the start of the season. Let’s see who should be right in the end …

Will Mercedes-Hamilton dominate again, or will Red Bull & Max Verstappen keep what they promised during the tests in Bahrain? More Formula 1 videos

Kevin Scheuren from the Formula 1 podcast “Starting Grid” talked extensively with our editor-in-chief Christian Nimmervoll and Lisa Höfer from RTL about the new Formula 1 season. In the new edition, the favorites, underdogs and backbenchers of the year 2021 are identified and the chances of each team are analyzed. A must for every Formula 1 fan!

You can listen to the new issue on our Formula 1 radio, on iTunes or on meinsportpodcast.de! Have fun!

“I think he will enjoy it,” said colleague Kimi Raikkonen, commenting on the return of his former team-mate Alonso. The Finn took a two-year break himself (2010, 2011) and then celebrated occasional successes with Lotus and Ferrari.

“Without the break I would certainly not be sitting here today and talking about Formula 1,” Raikkonen grins in an interview with ‘Sky’.

After a bicycle accident: “I was very lucky”

Shortly before the start of the test drives and in the middle of the preparation for the season, Fernando Alonso briefly kept the Formula 1 scene in suspense with his bike accident. The Asturian had to spend a few days in the hospital and had an operation on his upper jaw – he drives the entire season with two titanium plates in his jaw!

He knows: “I was very lucky. At the moment of the accident, I was worried. Because I was up [das Comeback] waited the whole last half year. Then suddenly you are in the hospital after a bike accident and you don’t know how long your recovery will take, “he said at the BBC. Fortunately, he was able to train again after a week’s rest. He felt fit, he emphasized before the first Run.

Review: The rookie moment of glory in 2001

Let’s take a look back at the 2001 Grand Prix weekend in Melbourne. Back then, not only a taciturn Finn appeared on the grid, but also a promising talent from Spain …

Raikkonen: Formula 1 has changed a lot

Kimi Raikkonen made his Formula 1 debut in Australia 20 (!) Years ago. The Finn will make his 330th race start in Bahrain, breaking the record last year. “The sport has changed a lot in the last 20 years, some days it’s harder than other days …” he said in an interview with ‘Sky’.

His contract with Alfa Romeo expires at the end of the year. Will he still compete in 2022 when completely new cars will be used? “I think everyone is excited about what’s going to happen, but honestly, it won’t decide whether I still race or not.” But he hopes that the rule changes will bring the desired changes.

Haas: Grosjean is now in charge of the esports team

The partnership between Haas and Romain Grosjean has not ended after he leaves for IndyCar, because the Frenchman will manage the Formula 1 racing team’s e-sports team in the future. That became known today. Grosjean founded his own team (“R8G eSports”) last year.

Haug: Nobody wants to be the favorite

What can we expect from Mercedes this coming weekend? After all, the test drives were not great, the world championship team unwound the fewest kilometers. However, you are not allowed to write off Toto Wolff’s squad, even if, according to the Mercedes engineers, Red Bull is ahead.

“It’s always a very good move to give the competitor the role of favorite,” smiles Norbert Haug in the ‘Sky’ interview when asked about it. Mercedes identified Red Bull as their favorite in the run-up to the race, but the Bulls are not taking on this role.

Mercedes had a bad start to the season, but that should only make the team stronger. “As the saying goes: the more unsuccessful the dress rehearsal, the better the world premiere will be. They are good. They may stumble sometimes, but the probability is rather small.”

– Analysis: Mercedes in trouble or is it all part of a plan?

Sky expert on Mercedes: “Something is going on there”

“Something is going on there that you do not want to tell us,” said Sky expert Karun Chandhok on the current situation at Mercedes to the Finnish news agency ‘STT’. What seems strange to the former racing driver: That the contract negotiations between Lewis Hamilton and the world championship team took so long.

Cancel Culture an College in England

Weather in Germany: is there an Arctic Outbreak? Pure excitement...

Mick Schumacher: “Expectations have to be dampened”