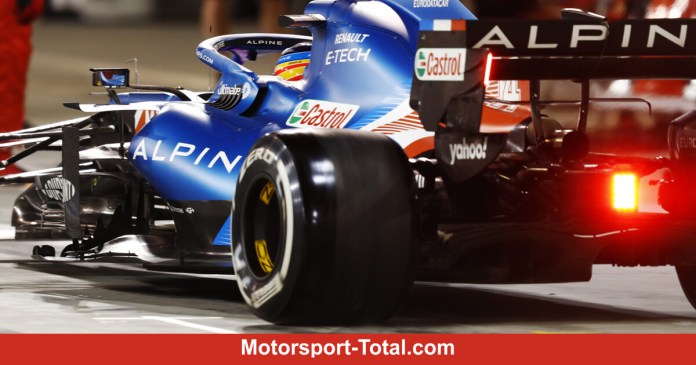 (Motorsport-Total.com) – Fernando Alonso only manages 33 race laps in his comeback race in Bahrain. The Spaniard had to park his Alpine car in the garage due to a braking problem. The curious reason: a sandwich packaging that was stuck in the brake shaft!

Fernando Alonso has to park his Alpine on lap 33

“After the second stop, a sandwich paper got stuck in the rear brake shaft of Fernando’s car, which led to high temperatures and damaged the brake system, so that we had to take him out of the race for safety reasons,” explains Alpine Director Marcin Budkowski.

“It was a very unfortunate first race for Fernando, considering how strong he looked”, he regrets the retirement of the former world champion. At the time of his retirement, Alonso was in 14th place shortly after his second pit stop.

In the second stint: problem with the battery on the straights

“It’s a shame that I couldn’t see the checkered flag today because I really enjoyed it. It was nice to be racing again,” said the two-time champion. He already felt the adrenaline on the grid. “It was all very emotional for me today.”

Alonso started the Bahrain Grand Prix from ninth on the grid. At the beginning he was able to make up two places, from lap nine he dueled Aston Martin driver Lance Stroll and Ferrari driver Carlos Sainz. “The race was fun at the start, I had a couple of good fights in the first stint.”

With his first tire change (from soft to medium) on lap eleven, he then triggered the series of first pit stops. With the undercut, he not only overtook Stroll, but also McLaren driver Daniel Ricciardo. However, he did not keep the positions for long.

“Fernando was able to make up positions on the first lap and stay in the top 10. After his first stop, however, we had a small problem, which meant that we had to reduce the performance of the car,” reports Budkowski. Specifically, a battery problem slowed him down on the straights.

The Spaniard visibly slowed down in the second stint and had to let Stroll and Ricciardo pass. A little later he lost more places in a duel against Carlos Sainz and Sebastian Vettel and finally tumbled out of the points.

His second pit stop on lap 29 (change from medium to hard) washed him back even further, to 17th place. A little later he involuntarily turned into the pit lane again. “Unfortunately we had to park the car early due to a braking problem.”

Alonso: “I’m not back to one hundred percent yet”

The almost 40-year-old regrets that he was unable to prevent the failure. “There is nothing we could have done. Now we are looking at Imola and we can hopefully collect points there.” Due to the technical difficulties, points in Sachir might “not have been possible today, or at least it would have been tight”.

At least he has now been able to gain initial experience in the A521, he emphasizes. “It was definitely good and interesting to finally drive against several cars under the same conditions, because so far we have only driven against a few cars in the tests that completed different programs.”

The action in the first laps and the safety car restart were also a good exercise, “we were able to collect a lot of information”. However, Alonso also emphasizes: “I’m not back to one hundred percent yet, I’m sure of that.”

Last night: The analysis of the Bahrain GP

He expects that in “five or six races” he will have found his way back to his old form. Even so, the old master gave a committed impression even on his return, as if he hadn’t taken a two-year Formula 1 break.

He already knows where to start: “I have to find more pace and more self-confidence. I also have to get more out of the car, for example when braking, and start better. It wasn’t that bad, but there is still Room for improvement on my part. “

Among other things, his position at the second pit stop was “incorrect”. These are the small details and mistakes that Alonso still wants to eradicate in the next races. “Hopefully I’ll be able to deliver better personally in the second and third races.”