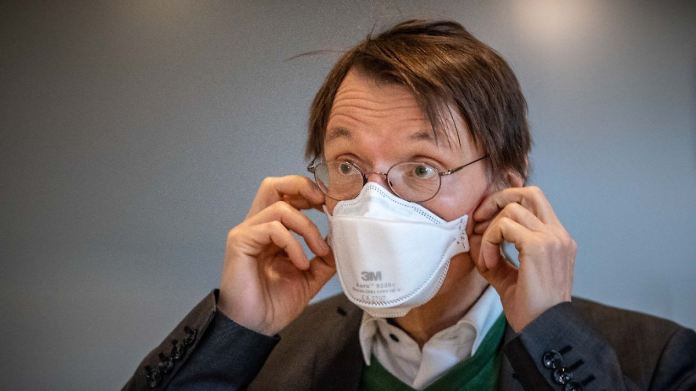 Also a curfew in conversation
Lauterbach calls for a harder lockdown

On Tuesday he said the Easter lockdown was “useful”, this Wednesday the SPD health expert Lauterbach added. According to him, the federal and state plans are not enough to contain the corona virus.
SPD health expert Karl Lauterbach believes the planned Easter rest is urgently needed, but would have wished it to be even harder and with a curfew. “We need another lockdown decision, we have now made it, I hope it works enough, I would have made it earlier and tougher,” said Lauterbach on WDR. “We need another lockdown to get the pace out of this B.1.1.7 mutation. None of the others did it any other way. There is no third way.”

It is scientifically proven that only lockdowns with curfew worked against a third wave with the dangerous British mutation. “So I would have even done it temporarily until we had distributed the tests all over the companies and in the schools and could then test them there, then the curfew would no longer have been necessary.” However, many other politicians said that this could not be expected of the citizen.

“But we are running the risk that we will decide on an Easter break, but will not be successful. Then we will lose more trust. Some people are not trusted to be willing to accept tougher measures if they are successful . ” When testing, it is important that this is done systematically in companies and schools. “I would have found it better if we had made this mandatory,” said Lauterbach, “but there was resistance”.

Scientifically, it has clearly been shown that the number of cases decreases if you test a large part of the population, around 40 percent, twice a week. “If I now voluntarily test, for example when shopping, (…) then that is also important, but it does not lower the third wave. It just goes on.” On Tuesday Lauterbach described the Easter lockdown as “useful”, but also warned of the rapid spread of the virus mutants.

Several federal states are not receiving a new vaccine

Coronavirus: Debate about the origin of the virus reignited

GAK is on course: Gantschnig hit forces FAC Vienna to its...

539 million francs net profit for Coop – also because of...

Berlin commemorates the victims of the Islamist terrorist attack – BZ...

iOS 15 update: these iPhones and iPads could get the system?