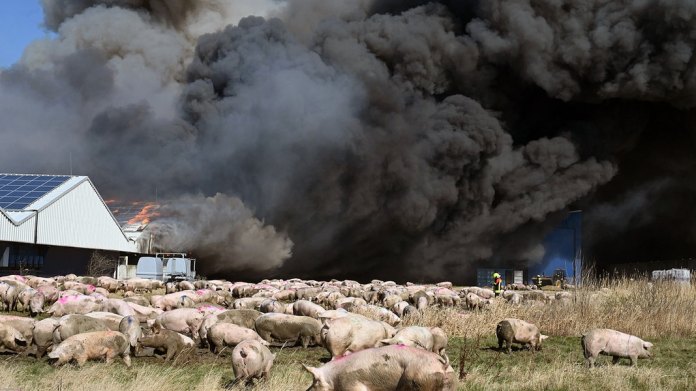 The fire had still not been extinguished by the afternoon. Smoke was still rising from the area, but the clouds were no longer as thick and black as they were in the morning, when from a distance of 20 kilometers you could still clearly see them moving for kilometers across the sky. Fire brigades and rescue workers from all over the region were still on site in the afternoon. The fire that broke out in the morning initially affected four stables, and around noon it spread to other parts of the facility. In the afternoon it was said that despite the large-scale fire brigade operation, all 18 stables in the facility had burned down. “We couldn’t think of the stables. That means the stables burned down completely,” said Karsten Windmüller from the Jarmen volunteer fire brigade. The fire is now under control.

“The animals ran wildly to and fro”

One employee was slightly injured in the fire. The sows and piglets kept in the stalls were hit worse. How many died in the flames is still unclear. The emergency services assume that the majority – thousands – should be. A reporter from NDR 1 Radio MV described at noon how helpers were busy driving sows out of the burning stables. “The rescued animals ran wildly to and fro on the company premises.”

The situation was still tense at noon because the wind had turned. The flames threatened to spread to an adjacent biogas plant. The fire brigade then cooled the system with water as a precaution. In the meantime, this danger has been averted, it said in the afternoon. Again and again gusts of wind made the flames flare up. A listener on NDR 1 Radio MV from a neighboring town of Alt Tellins reported that it had rained down on her ashes.

According to the police, the cause of the fire and the amount of damage is still unclear, but initial estimates suggest that it will run into the millions. The criminal police have already started investigating the cause of the fire, but the officers at the scene of the fire are not yet able to determine the fire. The fire brigade advised residents of surrounding towns such as Neu Plötz and Wilhelminenthal to keep the windows and doors closed until further notice.

Backhaus speaks of tragedy – and calls for consequences

Mecklenburg-Western Pomerania’s Agriculture Minister Till Backhaus (SPD) spoke of a tragedy. “As far as we know, there are around 9,000 sows and around 50,000 piglets in the facility. You cannot imagine the suffering of animals in such a fire,” explained the minister. All those who protested against this “piglet factory” when it was built now see themselves in the right. He also does not want such large-scale systems, they neither fit into the time nor into the country. “The legislative side has to act so that such tragedies do not repeat themselves over and over again. I remind you that we recently had a big fire in Kobrow that killed hundreds of animals,” said Backhaus.

Around 2,000 pigs died in the large fire near Sternberg. The damage is greater than initially assumed. more

One of the largest breeding facilities in northern Germany

The operation in Alt Tellin had already hit the headlines in 2019 because of a defective ventilation system. At that time, more than 1,000 pigs perished. The affected sow and piglet breeding facility was very controversial for years and belongs to one of the largest pig breeding operations in Germany – Landwirtschaftliche Ferkelzucht Deutschland (LFD) Holding, which was taken over by the Swiss Terra Grundwerte AG in 2020. According to earlier information, the facility has space for 10,000 sows and 35,000 piglets.

Criticism from the Vice-Mayor of Daberkow

Criticism of the approval authorities was raised from the neighboring community of Daberkow. “This system should not have been approved because of the fire protection in size,” said the deputy mayor, Thomas Kröchert. It is a shame that animals have to perish because of it. Kröchert is a farmer and cultivates land in the immediate vicinity. It is not about preventing pig farming in general, said the farmer. Only the size of the piglet rearing facility, which is close to Daberkow, is not acceptable. “Most of the effects, such as constant manure and animal transports, have to endure the neighboring villages.”

BUND: “It was looked the other way too long”

Left, Greens and environmental and animal welfare associations called for a new orientation in the planning of animal husbandry systems. “Such oversized animal breeding and fattening facilities may no longer be licensed and operated,” said the regional left parliamentarian, Jeannine Rösler. The reasons are fire protection problems, but also animal and environmental protection. The Federation for the Environment and Nature Conservation Germany (BUND) demanded that the permit for the “gigantic, animal-cruel and environmentally toxic facility” in Alt Tellin be revoked. The fire shows that people looked the other way too long.

Three pig farms in Mecklenburg-Western Pomerania, which formerly belonged to the Dutch Straathof, have a new owner. The dispute over the plant in Alt Tellin continues. more

The fire brigade and emergency doctors are always on standby in the event of an accident somewhere in the north. How do the rescuers go about it? All information in the picture gallery. Picture gallery

Apartments in Frankfurt and Taunus are in great demand despite the...

Police in MV continue to warn against stepping onto ice surfaces...

Speculation about a longer lockdown in Germany | Currently Germany...

Citigroup is transferring $ 501 million too much – and is... 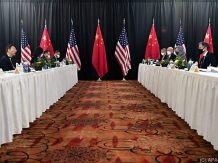 Load, stamina, breaks: Dynamo coach Kauczinski has that “in mind”