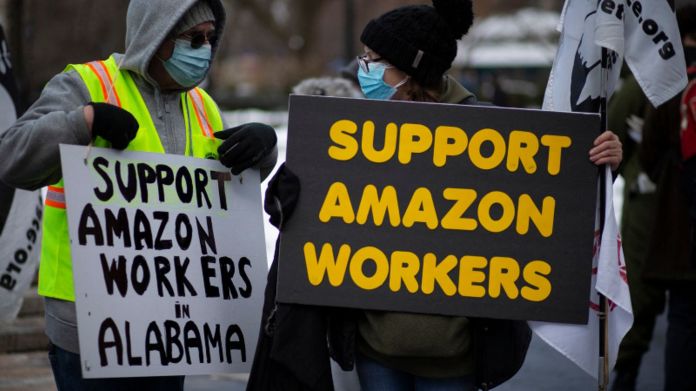 In the US, Amazon employees are demonstrating because they want to form a union
© Kena Betancur / AFP

Urine in bottles and poop in bags: Amazon employees say they can’t go to toilets due to lack of time. The group denies this. But according to internal e-mails, executives have known about the problem for a long time.

The largest corporations are not always the best employers. Amazon proves this again and again. While employees regularly complain about poor working conditions, the Internet giant is even getting in the way of unions. Amazon is currently denying stories that employees urinated in bottles due to time pressure and emptied their bowels in bags. The evidence says otherwise, however.

The plastic bottle scandal began in 2018 with a book by British journalist James Bloodworth. It said that employees in an Amazon department store in Staffordshire, England, were urinating in bottles because they simply had no time for toilet breaks due to strict production guidelines.

A report by “The Intercept” now raises new allegations. Delivery drivers there had also declared that they would dispose of bottles and bags for fear of being dismissed. And while Amazon also publicly denies these allegations, internal documents and numerous photos are now supposed to prove: The company is very well aware of these conditions.

According to Amazon employees, the practice is so widespread that managers in the company’s US branches regularly address it in internal meetings, e-mails and even official company policy. “The Intercept” quotes from a confidential document from January, according to which Amazon records “public urination” and “public emptying of the bowels” as offenses by employees. The document was leaked to the publication by an employee from Pittsburgh, Pennsylvania.

The same person also forwarded an email from last May in which a manager from logistics addressed specific cases: “Tonight, an employee discovered human feces in an Amazon bag that was returned by a driver,” is called it in it. “This is the third time in two months that bags of feces have been handed in.”

You understand that, especially in times of Covid, it is difficult to find a toilet when delivering the parcels, according to the sender. Because a particularly large number of masks, gloves and plastic bottles with urine were found during the period, all managers should remind the drivers once again that this behavior is unacceptable.

The Lord of Things: How Amazon boss Jeff Bezos became the richest man in the world

But obviously the knowledge of the time pressure problem has not led Amazon to change anything. Employees of the group reported to “The Intercept” that although they had a 30-minute paid break, they would not be able to meet the production specifications if they took them. If you do not deliver enough parcels, you will lose your job, according to a Californian employee. During the time she worked for Amazon, the requirements were also raised more and more.

Amazon itself is said to have not complied with the request for a statement to the portal. On Twitter, however, an official corporate account stated that the story of the urine bottles was made up. “If that were true, no one would want to work for us.” In fact, shortly after the tweet, the “Vice” magazine published pictures of two bottles with a yellow liquid that are said to have come from Amazon employees.

Also on the portal “Reddit” there have been posts for a long time in which employees of the group exchange information about the problem and the solutions to it. “Where do you get rid of your piss bottles?” Asks a contributor there. A driver writes that she bought a plastic extension for women so that she can urinate in bottles.

“Strangely enough,” she wrote there, “I ordered it from Amazon.” It didn’t help.