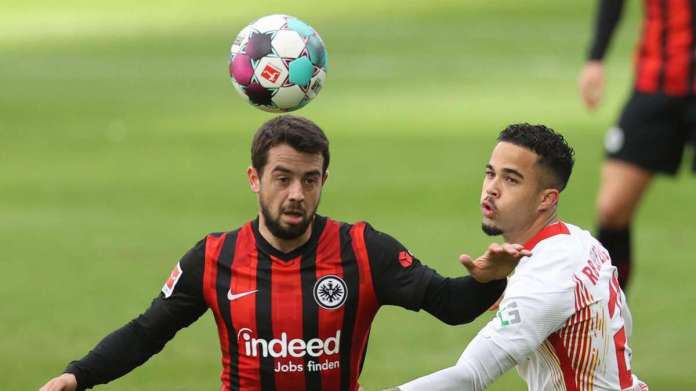 Eintracht professional Amin Younes has managed to become visible again and to return to the DFB-Elf.

Frankfurt am Main – It is unusual for a national soccer player to leave the elite circle at the age of 24 in order to be allowed to return at the age of 27. Amin Younes mastered this rare feat thanks to outstanding achievements at Eintracht Frankfurt. The turbodribbler didn’t miss much during his absence: a messed up World Cup and a failed EM.

On Tuesday, the DFB presented the compact guy in a virtual press conference from a hotel in his native Düsseldorf, where he grew up in a prefabricated building. Amin Younes looks as grumpy as on the soccer field. This humble brave of a green man is completely absent. Probably because he was there five times in 2017, because he is also pumped full of self-confidence and because he is a bright boy anyway.

The 1.68-meter-tall man then says headline-ready sentences such as: “I will no longer be a header monster” or “The basis is the street and the football field” or “I am a fan of spectacular things” or “Ultimately, football is also one Entertainment-Sport ”or“ It is important that you bring a complete package with you ”.

It is important to the son of a former Lebanese youth international and a German mother that he has to offer this complete package and not just dance with the ball as a dribbler. “It annoys me a bit when I am reduced to one-on-one situations.” As proof, he cites his yellow card suspension that has just been dismissed. “I have shown that I also have strengths against the ball.” Attacking midfielder who has already picked up yellow five times in 19 games can not only do lapdogs, but also terriers.

With this approach, the little marauder wants to continue throwing himself into defensive duels like crazy and do a lot of good for his employer Eintracht Frankfurt. “I would like us to make the Champions League clear,” he says bluntly, “we want to bring that to the fans”. He feels “almost a bit guilty” that they cannot come to the stadium at the moment to experience the splendid Frankfurt football on site. “I feel incredibly at home in Frankfurt. These are great guys here who all want to play football. “

Younes should also bring this desire for the primitive, which is described by the now somewhat worn word “football field mentality”, into the national team. Since Sebastian Jung’s only international match in spring 2014, he would be the first to play in the World Cup qualifiers for Qatar 2022 against Iceland (Thursday, 20.45 / RTL), in Romania (Sunday) and against North Macedonia (Wednesday) after seven years Frankfurt field player who made it into the A-team. Together with today’s Frankfurt team-mate Kevin Trapp, Younes made his debut as a player for Ajax Amsterdam in June 2017 at 1-1 in Denmark. In the handful of missions for the country, he was only one of the starting XI, but still scored two goals. Not a bad record.

In 2017 he was part of the victorious Confederation Cup squad in Russia. “We were a sworn bunch,” he remembers of a summer full of lightness. This memory also drives him. “My dream of the European Championship is very, very big. It’s about Germany, I want to be a part of it. ”In 2017, Julian Draxler, as the best player in the Confederation Cup at the time, was just as far ahead of Younes in the team hierarchy as Julian Brandt. He has now overtaken both of them. They were not nominated by national coach Joachim Löw.

But the truth is also: In the attacking midfield there is a lot of jostling even without Younes, Brandt and Draxler, especially since Thomas Müller’s return to the EM is imminent. The current line-up of Joachim Löw’s team includes Kai Havertz, Florian Neuhaus, Leon Goretzka, Jonas Hofmann, Florian Wirtz and Jamal Musiala. All people who, like Younes, feel comfortable in the eight and ten positions.

Eintracht Frankfurt: Amin Younes with an impressive gesture after the attack in Hanau

Whatever happens – for Amin Younes the calendar year 2021 is already one of the great recognitions. With his gesture to the victims of the racist attack in Hanau, when he held up a t-shirt to commemorate his dream goal against Bayern Munich, he also earned social respect. He later found the appropriate words when he said he sympathized with the relatives whose children, grandchildren and siblings had not come home after the attack.

Apparently someone has become a mature person and professional footballer who once failed in the second division at 1. FC Kaiserslautern because he lacked seriousness, who made negative headlines in Amsterdam because he refused to come on and that in Naples and Wolfsburg at the same time signed two contracts.

Amin Younes was invisible during the first test with Eintracht Frankfurt

When Amin Younes completed a first test for Eintracht Frankfurt in the late summer of 2020, the game was lost 3-0 against second division team Würzburg. Younes stayed invisible. The path to visibility couldn’t have been more impressive.

Germany’s most famous forensic doctor doubts the cause of death

FFP2 & MNS masks under the microscope