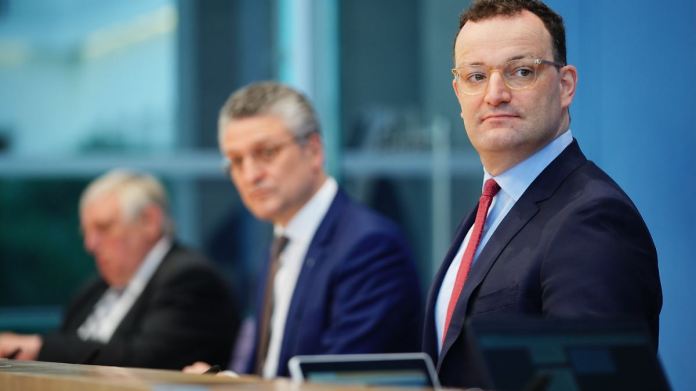 Are there really enough tests?
Spahn: We’re going to the limit

On Monday, regular quick and self-tests for all citizens will accompany the relaxation of the corona measures. At the federal press conference, Health Minister Spahn tried to dispel concerns that there were not enough tests.
Federal Minister of Health Jens Spahn defended the corona resolutions by the federal and state governments and rejected fears that there could be a bottleneck in rapid and self-tests in the coming weeks. It was a matter of finding the right balance between normalcy and the protection of health, “said Spahn about the new step-by-step plan.” After months of lockdown it was clear that it would not have been justifiable not to venture any opening steps “- although it was an easy one again increasing seven-day incidence. The opening options provided by the federal and state governments went to the limit of what is responsible,

Spahn does not believe that there could be too few quick and self-tests. “There are more than enough of the rapid tests,” said the CDU politician at a joint appearance with NRW Health Minister Karl-Josef Laumann and Lothar Wieler, President of the Robert Koch Institute at the federal press conference.

There are also enough self-tests. “We have seven approved manufacturers, more will follow,” said Spahn. A manufacturer told him it could deliver 20 million pieces a week. “I also like to offer myself as a contact exchange,” said Spahn. He would like to put the Prime Minister in touch with the manufacturers. The minister was recently criticized for having admitted that he had not ordered self-tests. These have only recently been approved and can be carried out by laypeople on their own. Rapid tests have been in use since autumn, but must be approved by trained personnel.

When it comes to delivering self-tests to schools and daycare centers, for example, Spahn was confident. “We are world champions in logistics,” said the minister. “If a country says we have 1000 schools, the address is as follows, please deliver so and so many self-tests every week, then every German logistician can do it.” Spahn announced talks with the federal states to clarify these questions.

Free rapid tests not immediately available to everyone

Spahn and Laumann also admitted that free rapid tests will not be available on Monday, as everywhere in Germany. As part of their step-by-step plan, the federal and state governments decided on Wednesday to pay each of the people in the state one quick test per week. “It is important that we get into action,” said Spahn. “That will develop in the days after March 8th.” It was important that the federal government covered the costs and set the legal framework. According to Spahn and Laumann, pharmacies, but also municipal test centers, should carry out the rapid tests. A central order is not planned. You should order the units that require rapid tests yourself.

Doctors’ practices should start vaccinating by April at the latest, as there would then be more vaccine than could be injected in the vaccination centers. Like other vaccines against other diseases such as influenza, the vaccine is to be delivered to doctors via wholesalers and pharmacies, said Spahn. Vaccine could reach the practice within 24 hours – “with the logistics that are already in place today”. Laumann said that so far this has not happened in North Rhine-Westphalia because there was not enough vaccine. He welcomed that the Astrazeneca vaccine was well suited for this.

In a further step, company doctors can also vaccinate company employees, said Spahn. Several large corporations had offered this. First, however, the vaccination sequence should be adhered to.

Switch Pro: Analysts predict a record year for Nintendo in 2021

Practical forum for plastics technology of the VDWF as a successful...