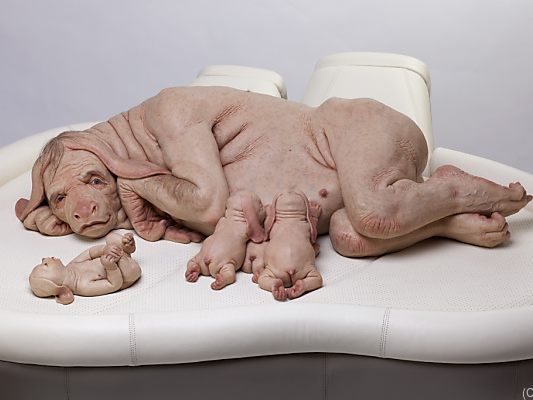 
Patricia Piccinini makes you want more in Krems
© WHAT

The Kunstmeile Krems has two new exhibitions: the show “Embracing the Future” with transgenic hybrid figures by the Australian Patricia Piccinini can be seen in the Kunsthalle. The show “Up to New” in the Landesgalerie Lower Austria leads in a rapid course based on around 150 works from private collections from Egon Schiele to Eva Schlegel.

A rigid sea of ​​white plastic flowers in the great hall of the Kunstmeile: In one corner is a tent in which two – yes, what now – living beings, at least a man and a woman with clawed arms and legs, rest in intimate togetherness. Piccinini’s realistic sculptures always seem strange for a moment, but quickly also touching: friendly aliens, distant relatives of ET, original science fiction hybrids of humans and animals. They all radiate sympathy and emotion, are not frightening monsters, but rather show human traits. Whereby it is definitely not about the humanization of animals, but about the focus on commonalities.

“If it is so difficult to determine where one begins and the other ends, then we can really continue to believe in the barriers that separate us from one another”: This quote from the artist on an exhibition wall probably hits the core of the intention. Piccinini’s work can be interpreted as a wondrous as well as wonderful plea against the fear of the stranger and for understanding and empathy with all living beings. The spectacular exhibition in Krems was created in cooperation with the Institute for Cultural Exchange in Tübingen and has already been shown in the Arken Museum for Modern Art in Copenhagen and in the Boras Art Museum in Sweden.

Works from important private collections – such as Leopold, Angerlehner, Zambo, Liaunig, Infeld – in the Landesgalerie Lower Austria show the diverse development of contemporary visual and formal language. One section each is dedicated to Schiele and his contemporaries, the years of awakening after the Second World War and the stylistic pluralism of the 1990s – with numerous remarkable details. For example, Schiele’s “Crumbling Mill” can be seen for the first time together with the preliminary drawing. The names of the recently deceased are also represented in the show, such as Arik Brauer, Hans Staudacher, Oswald Oberhuber and Romana Scheffknecht. Catalogs are available for both exhibitions, which will open on Saturday (tomorrow) with an open day with free admission. Due to the current Covid-19 regulation, both exhibition halls will be closed from April 1st to 6th inclusive. For the museum visit afterwards, prior information is recommended on the website. (SERVICE – Kunsthalle Krems: Patricia Piccinini: “Embracing the Future”, until October 3, 2021. Landesgalerie Lower Austria: “Up to New. Three decades from Schiele to Schlegel from private ownership”) until February 6, 2022.)

Chickens end up in the shelter more often

Tatort (ARD) from Vienna today: “Below” – When the homeless disappear,...

Vaccination start in Carinthia on Tuesday

This is what parents get for the daycare and school lockdown