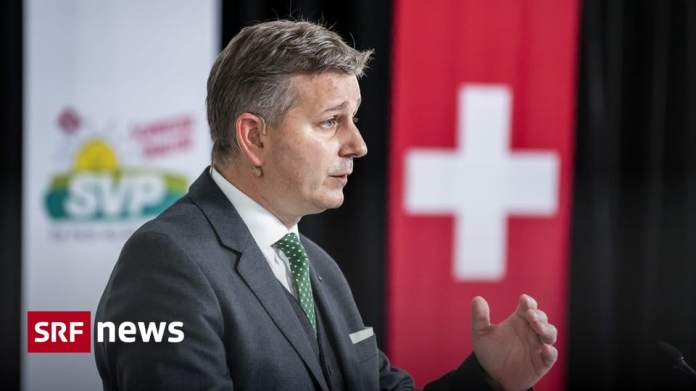 The approval of the referendum against the federal law on the legal basis for ordinances of the Federal Council to cope with the Covid-19 epidemic (Covid-19 law) was approved with 80 to 64 votes with 19 abstentions. The Covid-19 law will be voted on on June 13th.

Chiesa: No to Covid law is problematic

SVP President Marco Chiesa had previously stated in his address to the delegates that the Covid-19 law was overloaded and linked non-relevant topics such as economic aid and the granting of powers for the Federal Council.

But because at the same time it forms the basis for economic aid for those who are in need as a result of the Corona measures, a no is also problematic. Therefore, the party executive decided to apply to the assembly of delegates to allow voting.

Maurer: The crisis will cost 70 billion by the end of the year

Federal Councilor Ueli Maurer calculated at the DV how much the corona crisis is likely to cost by the end of the year: 60 to 70 billion francs. “We need a lot, a lot of money,” said the finance minister. The current Corona measures cost around 750 million francs per week. “But that’s not all.”

We are then in a range of 60 to 70 billion, provided the lockdown does not last any longer.

Unemployment insurance, AHV, VAT and tax revenues are also affected. “That puts us in a range of 60 to 70 billion, provided the lockdown doesn’t last any longer.” It is important to find a balance between the financial, health and social consequences of the corona crisis. “We have to get that better under control, we haven’t paid enough attention to that up to now.”

No to the CO2 law, yes to the terrorism law

The referendum against the Federal Act on the Reduction of Greenhouse Gas Emissions (CO2 Act) did not stand a chance among the SVP delegates: They rejected the proposal with 120 to 6 votes.

For this, the slogan in favor of the federal law on police measures to combat terrorism was passed with 123 to 15 votes. The majority of the delegates supported the view that Switzerland must be able to defend its institutions against extremism. That is why instruments are needed, from prevention and sanctions to information gathering. The measures contained in the template are proportionate.

No to the drinking water and pesticide initiative

The delegates twice recommended no to the drinking water initiative and the pesticide initiative. They followed the recommendation of the party executive.

Yungblud: the voice of a whole generation