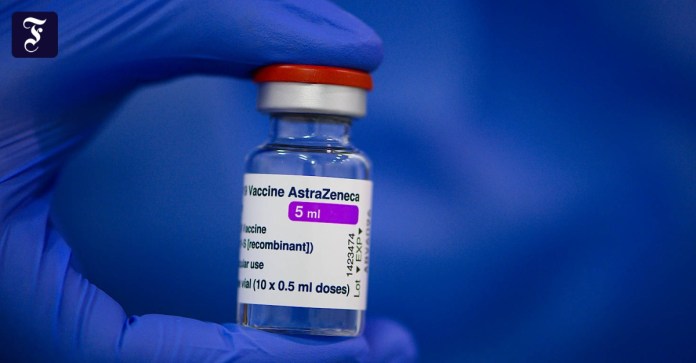 Dhe corona vaccine from Astra-Zeneca is only used in individual cases in Germany for people under 60 years of age. The conference of health ministers of the federal states decided on Tuesday, following a recommendation from the Standing Vaccination Commission (Stiko), that the vaccine should only be used from Wednesday on in people who have reached the age of 60.

Younger people in vaccination priority groups one and two can therefore “decide together with the vaccinating doctor at the doctor’s discretion and in the case of an individual risk analysis after careful information that they want to be vaccinated with Astra-Zeneca”. These vaccinations should “generally be carried out in the practices of established doctors”.

At the same time, the Astra-Zeneca product can now be used in people between the ages of 60 and 70, although they are usually only in the third vaccination group. “The federal states are free to include 60 to 69-year-olds for this vaccine in their vaccination campaign,” the decision says. “This makes it possible to vaccinate this particularly endangered and numerically large age group more quickly in view of the growing third wave.”

According to the Conference of Health Ministers, people under the age of 60 who have already had their first vaccination with Astra-Zeneca can choose whether they also want the second vaccination with this product. Instead, you can wait and see how the Stiko positions itself for a time vaccination with another product. The panel of experts wants to comment on this by the end of April.

The Stiko had recently issued a new recommendation for Astra-Zeneca, according to which the vaccine should only be used for people over 60. According to her own statements, she decided to do this “on the basis of the currently available data on the occurrence of rare but very severe thromboembolic side effects” in younger vaccinated persons. Blood clots in the brain, so-called sinus vein thromboses, occurred several times in connection with the Astra-Zeneca vaccinations, especially in younger women.

The Erlangen virologist and Stiko member Klaus Überla described the decision to the editorial network Germany as “correct”. The available data suggest “a causal relationship between vaccination of women under 55 years of age with Astra-Zeneca and the occurrence of cerebral vein thrombosis in these women – even if these are rare occurrences,” he said.

At the same time, the risk of these women going through severe Covid 19 diseases must be considered. If they have no previous illnesses, it is moderate. “Overall, it would therefore be better to protect this group with other Covid-19 vaccines,” said Überla. In the case of people over 60 years of age, on the other hand, “the Covid 19 risk far outweighs the risk of cerebral vein thrombosis”.

The Berlin doctor and Stiko member Martin Terhardt said on Rundfunk Berlin-Brandenburg that it would make sense to continue using the vaccine in older people, “because these signals of dangerous complications did not occur”. At the same time, he regretted that there were fundamental doubts in the population about Astra-Zeneca, “because we currently have a lot of this vaccine and will still get it and it would also make sense to use this vaccine”.

Despite the corona crisis: Skoda continues on the road to success

House pre-sales in the districts: what’s next with Heimstaden? –...