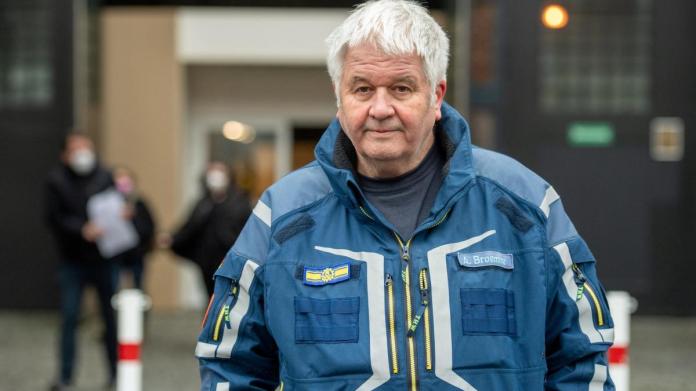 Germany The Berliner and AstraZeneca

“A fairy tale that vaccine is left lying around”

The project manager of the Berlin vaccination centers contradicts a report according to which hundreds of thousands are said to have waived vaccination with AstraZeneca. He explains what happens when people don’t accept their invitation – and where he sees the bigger problem.

WORLD: Mr Broemme, it was read in the “Tagesspiegel” that hundreds of thousands of Berliners did not take advantage of their vaccination invitation – possibly because they had reservations about the AstraZeneca. Numerous vaccination appointments have been free every day for weeks. Does that mean this vaccine is a slow seller?

Albrecht Broemme: We have six vaccination centers in Berlin – three for Biontech, two for AstraZeneca and one for Moderna. One thing is certain: if you choose AstraZeneca, you can get an appointment at short notice, often the next day. At Biontech and Moderna, the next dates won’t be until May.

At AstraZeneca, people are obviously more reluctant. But that shouldn’t be overestimated. I know enough people who would love to be vaccinated with it. I don’t think that hundreds of thousands of people are supposed to not take up their invitations. I cannot confirm these numbers. On the contrary: the real bottleneck is and will remain the vaccine supply.

WORLD: What does that mean?

Broemme: Vaccination appointments in Berlin are only given in connection with a vaccine availability forecast. Therefore, the invitations have gradually been issued in doses. We currently have vaccine for 14,000 vaccinations a day. The centers are designed for up to 20,000 vaccinations per day, scalable to 30,000. So there is still a lot of room for improvement.

There are no problems with making appointments in Berlin. The hotline is manned by up to 200 soldiers, so you can usually get through it the first or second time. And it’s even easier online.

WORLD: So you can rule out that AstraZeneca is being dumped unused?

Broemme: Absolutely. That is one of those fairy tales that are loved to be told. In Berlin only the vaccine is in stock, which has to be withheld for the second vaccination. By January that was 50 percent. In the meantime we have reduced this amount to 25 percent in order to enable first vaccinations.

And the second fairy tale is that vaccine is left lying around in the vaccination centers in the evening. That’s just not true. If there are drawn syringes left, but there are no scheduled customers, followers come into play: hospitals, police, fire brigade. This is very tight and well organized in Berlin. And the need is huge. However, my feeling is that there are forces who want to ruin the vaccine. AstraZeneca’s reputation has been systematically ruined.

WORLD: What if you notice that there are fewer registrations than there is vaccine in stock?

Broemme: Then we will get in touch with groups of people from the replacement list. Of course, like everywhere else, there are vaccination opponents or vaccination skeptics. But there are enough people who are happy about anyone who does not get vaccinated – because then it is their turn faster. There is definitely no vaccine left lying around. AstraZeneca is not a slow-moving company in Berlin.

WORLD: Berlin’s Governing Mayor Michael Müller (SPD) demands that one should discuss a softening of the vaccination prioritization. Do you agree?

Broemme: I would see it that way too. The pure age-based approach has achieved a lot, but is then no longer necessary. I would suggest an approach based on professional groups. All those who have to be in public a lot and have a lot of contacts should receive preferential treatment, for example hairdressers, bus drivers, postmen.

We have to start the discussion about changing the vaccination ordinance now so that we can act when vaccine deliveries increase. But we cannot open the gates completely, otherwise we will have a queue from Tegel to the Dreieck radio tower. Without an invitation, I would not ask anyone to come to the vaccination center.

WORLD: When do you expect to have enough vaccine to keep the centers running at full capacity?

Broemme: I was wrong once before. I originally assumed that we would be covered with vaccines from April onwards. Now I’m more likely to assume May. Hopefully it stays that way. After all, medical practices should also start.

We are much further ahead than other federal states. In Berlin, everyone over the age of 70 has their vaccination invitation. This is by no means the case everywhere. And I am often approached in Berlin to thank me for the excellent organization.

Can a box do a Doom II? Yes

Theatrical release of a new James Bond film has already been...