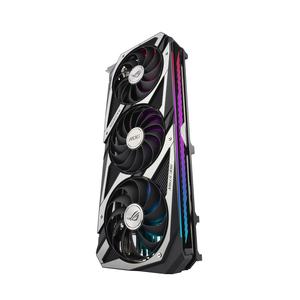 As for all custom models of the Radeon RX 6700 XT, the following also applies here: The manufacturers do not yet provide any information on the clock rates of the cards, so we have to limit ourselves to the external features when looking at the cards. The ROG Strix Radeon RX 6700 XT represents the spearhead. Here the buyer gets the already known ROG functions such as a massive cooler with three axial fans, a 0dB mode and additional fan connections. An OC and silent BIOS is also included again. The most striking feature is likely to be the RGB lighting, which provides a wide light strip on the front. The additional power supply is provided via two 8-pin connections.

The TUF Gaming Radeon RX 6700 XT is located a little below the ROG variant. In terms of cooling, you shouldn’t have to make any major compromises, but above all ASUS is a bit more cautious when it comes to RGB lighting. You don’t have to do without a 0dB mode here either. Here, too, the additional power supply is provided via two 8-pin connections.

ASUS has positioned the Dual Radeon RX 6700 XT as an entry-level version. How this will look based on the clock rates remains to be seen. Most noticeable are certainly the two axial fans, which ASUS has reduced in number compared to the other models. There are also subtle LED accents and the fans can be switched off while idling. Apparently the TUF Gaming Radeon RX 6700 XT gets by with an 8-pin and a 6-pin connector.

As I said, there is currently no information on the clock rates of the individual models. The prices are not yet known either. The cards should be in stores from March 18th.

Gigabyte has also presented two new models. The Radeon RX 6700 XT Gaming OC 12G and Radeon RX 6700 XT Eagle 12G also have no clock information. Both cards use three axial fans and obviously only differ in a few details. The Windforce 3X cooling uses a medium, counter-rotating fan. Both models have a 0dB mode. Other differences are likely to be found in the RGB lighting. Gigabyte relies on an 8-pin and a 6-pin connector for additional power supply.

From March 18, the Gigabyte models should be in stores. This manufacturer does not provide any information on prices either.

Pietro Lombardi was stolen half a million euros

Did you know? New “Das Traumschiff” episode filmed in Germany