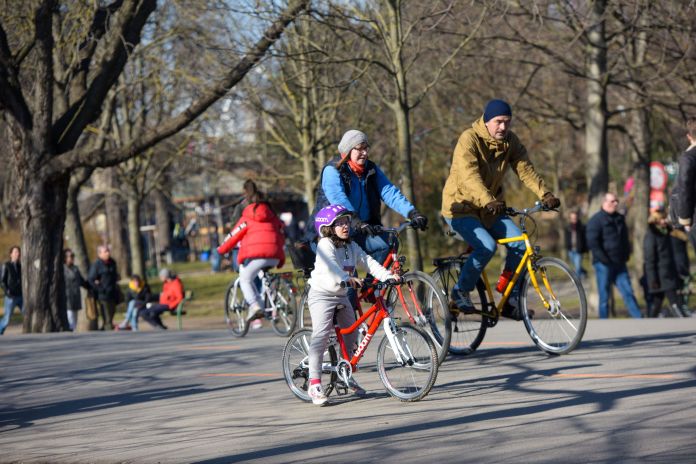 The next few days promise fantastic weather in Austria. “Today” has the details.

Early summer comes to Austria for a visit during Holy Week. According to the experts at the Austrian Severe Weather Center UWZ, temperatures climb to 18 to 24, in some cases 25 degrees, especially from Tuesday to Thursday. Such values ​​are more suitable for June than March, the marked cooling then follows on Good Friday. From today’s perspective, Easter 2021 should therefore tend to be fresh and changeable. Not unusual, anything is possible between snow and 30 degrees at Easter in the Alpine republic.

After a cold front has passed through, Sunday is still slightly changeable with dense clouds in the southeast and temporary sunshine in the rest of the country. The temperatures present themselves halfway according to the season, they rise to 9 to 17 degrees.

In the new week, Hoch “Nicole” not only ensures a few days with lots of sunshine, the temperatures are also climbing bit by bit. On Monday, a mild 15 to 22 degrees will be reached, with the highest values ​​being located in the Inn Valley. It remains comparatively cool at higher altitudes in the eastern mountainous region.

“On Tuesday and Wednesday it gets even warmer, with 18 to 24 degrees something reminds you of early summer,” says Manfred Spatzierer, chief meteorologist at the severe weather center. “Even 25 degrees are possible, a summer day by definition.” This was last the case in March four years ago (26 degrees in Bischofshofen). In 2021, the hot candidates for this on Wednesday are Landeck, Imst and Innsbruck. To classify: Now at the end of March, the average maximum values ​​in the state capitals are actually 10 to 15 degrees.

Record out of reach

The record for March remains unchanged despite the exceptionally high temperatures next week. This was a while ago and dates from 1977, when Gumpoldskirchen measured 27.5 degrees, closely followed by Eisenstadt with 27.4 degrees. March is one of the few months whose record dates back to the distant past and still holds, most monthly records have been raised several times in times of climate change since the turn of the millennium.

Strong cooling off at Easter

Even on Maundy Thursday, April 1st, the early summer-like weather persists, but a striking cold front is already approaching over Germany. It reaches the Alps on Good Friday night. “The temperatures drop widely by 10 to 15 degrees and in the northern Alps the snowfall line drops from today’s perspective to around 600 m,” the meteorologist continues. “The Easter weekend is likely to be unstable and fresh, even if the exact weather development is still fraught with greater uncertainty.”

Anything possible at Easter

The weather at Easter is very different from year to year: On the one hand, there are often very cold air masses in Northern Europe in the transition season, which can reach Austria if the weather conditions are right. On the other hand, with a southerly current in combination with the already high position of the sun in April there are already summery days with values ​​above 25 degrees. Of course, the different dates of Easter also play an important role in the Easter weather.

“If you look at the Easter celebrations of the past 30 years, 2013 immediately catches your eye,” recalls Spatzierer. “At that time, a massive ingress of cold air just in time for the festival ensured winter conditions with snowfall down to the lower elevations.” In the eastern northern Alps there was 20 to 30 cm of snow, but even in the lowlands there was some wet snow in the north and east. In the southern Mostviertel there were even power outages due to fallen trees.

A look at the year 2000 shows that Easter can be completely different in terms of weather: With temperatures of up to 29 degrees in Salzburg, there was widespread summer weather in April. In 2009 and 2011 you could look for the Easter basket in your T-shirt when the temperature was over 20 degrees.

Rapper sees himself harassed: Fler is back on trial – and...

Corona year: Liqui Moly, the lubricant manufacturer, loses half of its...

Side effects are most often reported to Astra Zeneca

Radio SRF will soon broadcast the news from Zurich – 70...