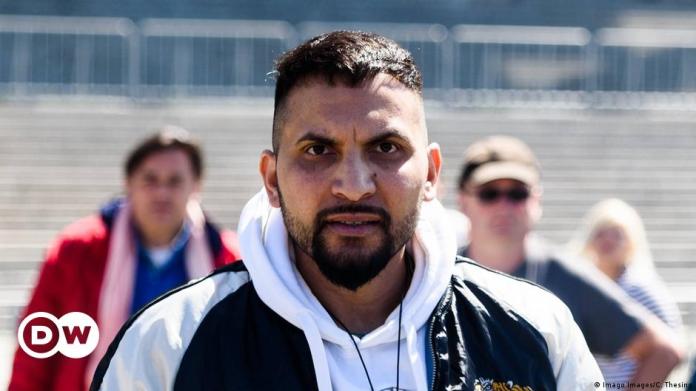 From a safe distance he sends hate messages towards Germany, every hour or even minute. Attila Hildmann has posted around 500 messages in his channel with the messenger service Telegram since it became known last week that he had left Germany for Turkey. Text messages, audio messages, videos. Photos of him posing and aiming with a gun.

He repeatedly calls on his almost 120,000 followers to use violence against the German state and “disempower the regime”.

Above all, however, Hildmann openly incites Jews, whom he insults as “subhumans” and “scum”. Again and again he also puts polls in his channel: Do his subscribers see Jews as human beings, or as “lying-consuming parasites”? More than 2500 subscribers take part in the survey. Almost 60 percent choose the second answer option.

May 30, 2020: In the course of the year, Hildmann becomes more and more radical – here he takes part in a demonstration against the Corona measures followed by a car parade

Hildmann became successful as a self-taught author of vegan cookbooks. In the past twelve months, Pia Lamberty notes that he has become a dangerous whip. The social psychologist and a colleague have just founded the “Center for Monitoring, Analysis and Strategy”, or CeMAS for short. Throughout Germany, numerous experts from different specialist areas have come together to develop an early warning system against digital conspiracy ideologies, disinformation and right-wing extremism.

Lamberty warns of the impact Hildmann’s words could have on others. He repeatedly uses war rhetoric in his posts. The message contained therein: We are at war, so means of war are also allowed. “Such narratives in combination with his open anti-Semitism can encourage people to do just that. Digital hatred has real consequences.”

The 39-year-old was born in Berlin to Turkish parents who gave him up for adoption as a baby. Hildmann grew up with German adoptive parents, his foster father died when he was 19 years old. Hildmann identifies his excessive meat consumption as the cause and draws conclusions: he changes his diet to vegan, starts to play sports and claims to lose 30 kilograms.

Starting in 2009, he has been writing vegan cookbooks, which to date have sold over a million times. Hildmann receives positive reviews in established media, most of which portray him as a strong-willed doer who has turned his dumpling existence into a healthy and successful lifestyle. “I’ve gone from being a fat man with no drive to someone who can motivate people on a large scale,” said Hildmann in a 2014 newspaper interview.

If the reviews are less positive, the self-proclaimed “vegan king” can be aggressive: In 2017, Hildmann opened a vegan snack bar, which shortly thereafter received a critical review. Hildmann writes in a Facebook post that he “would have loved to stuff French fries into her Wannabe journalist’s face” for the journalist.

Hildmann mainly uses its social media profiles to advertise itself and its vegan products. From March 2020 that will change, it has a new topic: the corona pandemic.

With the new topic comes a new favorite platform: the Telegram messenger service. 118,000 people are currently subscribed to his channel there. 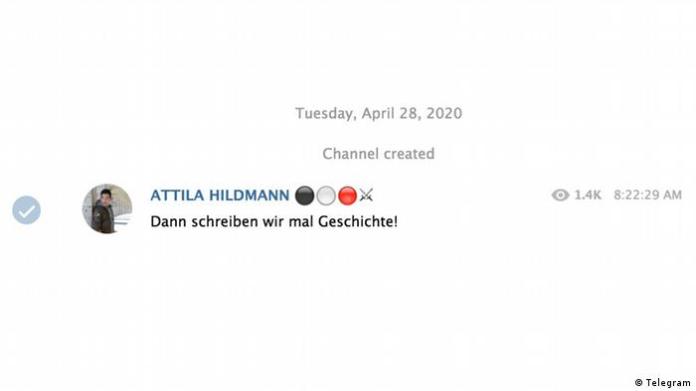 Attila Hildmann will speak for the first time there on April 28, 2020. Behind it three colored circles: in black, red and white. The colors of the imperial war flag. Today it is considered a hallmark of right-wing extremists and citizens of the Reich in Germany. On the first day alone, he fired more than 70 posts, photos and audio messages in his newly created channel. A taste of what’s to come in the months after that.

At Telegram he can still let off steam to this day. In contrast to other social media platforms, which now more or less consistently take action against its content. On Instagram, his account is completely blocked, on YouTube Hildmann is partially blocked because his content has become more and more radical.

Hildmann has also provoked in the past: in 2015 – a time when thousands of refugees flocked to Germany – he called integration in this country a “sensitive issue” and warns that it would lead to “a current self-mutilation of German values ​​and culture” . His statements have become more and more coarse, “possibly with the aim of getting more attention again in the short term through the shock moment and exceeding limits,” explains Pia Lamberty.

Miro Dittrich, who will also conduct research under the umbrella of CeMAS in the future and specialize in right-wing extremist online cultures and anti-Semitism on the Internet, also sees the motif seeking attention. The first lockdown in spring 2020 meant that the successful chef was “deprived of the basis of his business” overnight – and at the same time a certain amount of public attention was missing. In his Telegram channel, Hildmann then “found a community that rewards him with attention.”

But Hildmann gets deeper and deeper into his hateful intoxication – and also crosses legal boundaries in the process. 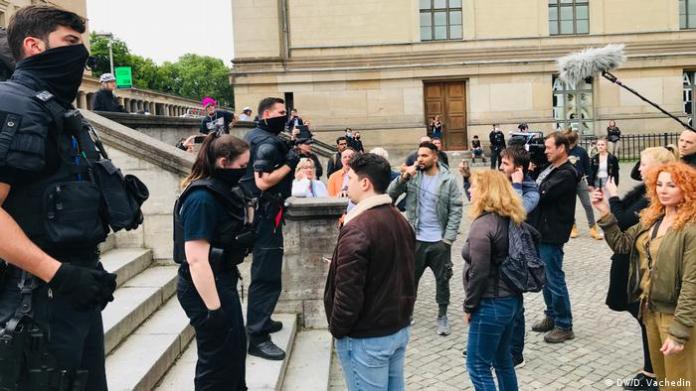 Since May 2020, the Brandenburg police have been receiving complaints against Hildmann for sedition, and in June the state security will take over the investigation. Still, nothing happens for a long time. A devastating signal, says Pia Lamberty: “He saw that the German law enforcement authorities are not sanctioning him. In purely strategic terms, he no longer had to cover up his anti-Semitism because he feared no consequences.”

In November 2020, Hildmann’s apartment will be searched for the first time by state guards from the Brandenburg police. Several computers, laptops, cell phones and other storage media are confiscated. A short time later, the data and documents are pooled at the Berlin public prosecutor’s office. This initiates investigations, among other things, “because of urgent suspicion of sedition”.

But before the investigations lead to a result, Hildmann went into hiding in February 2021.

The data collection is still being evaluated, says a spokesman for the Berlin Public Prosecutor’s Office when asked. For each statement it must be decided whether there is suspicion of criminal liability or whether it is still covered by freedom of expression. This takes a while.

On March 25, the Berlin Public Prosecutor’s Office confirmed that Hildmann was in Turkey and issued an arrest warrant against the former television chef, who was both German and Turkish. On the same day, Hildmann confirms his whereabouts on his Twitter account: 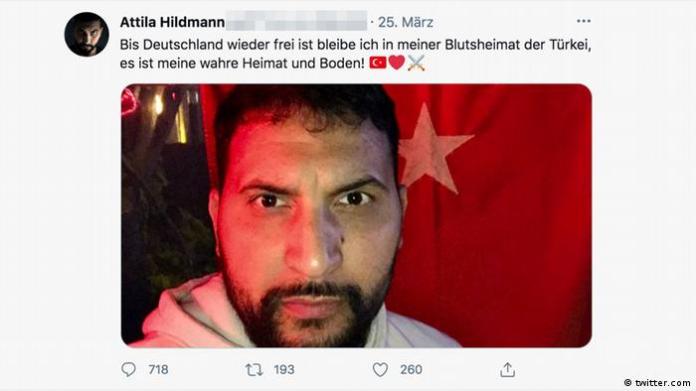 The successful escape also has an impact on Hildmann’s fan base, who are now celebrating him for successfully playing cat and mouse with the German authorities. “In principle, it is very embarrassing for the security apparatus that they slept so long here and let him escape. The path he was taking has been obvious for a long time. You should have reacted earlier, and that is embarrassing,” says Dittrich .

When asked whether Germany could submit an extradition request to Turkey in order to execute the arrest warrant, the public prosecutor’s office spokesman said that it was difficult because Hildmann is also a Turkish citizen. Ultimately, it remains with the content of the public prosecutor’s office tweet in the Hildmann case – according to the authorities, the arrest warrant is not expected to be executed soon. 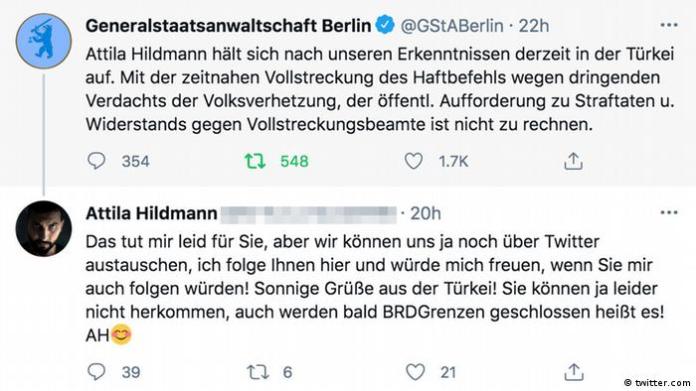 In response to the tweet from the Berlin Public Prosecutor’s Office, Hildmann only sends “sunny greetings from Turkey.”

Kelag takes over power plants in France and Portugal from RWE

So sweet! Johannes Haller makes a declaration of love to...

Pallets instead of passengers: air freight is supposed to save holiday... 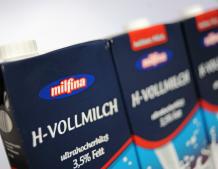