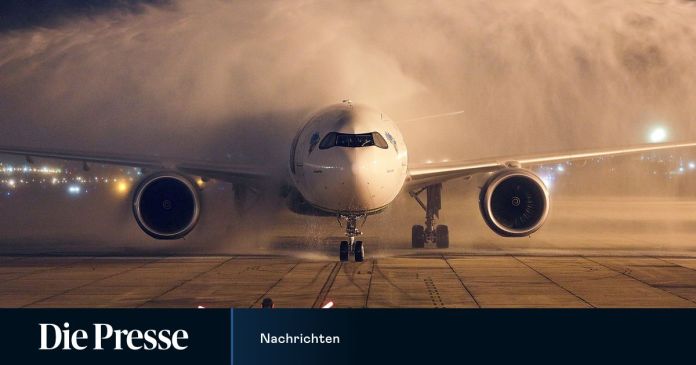 In 2020, the AUA wrote its worst result in the company’s 63-year history. If business picks up halfway in the summer, you can get over the mountain without further help.

Wien. Even if the AUA has been in the black for the past seven years, the Lufthansa subsidiary has gotten used to economic grief from earlier years. The year 2020 overshadowed everything that has come before, said AUA boss Alexis von Hoensbroech on Thursday at the presentation of the figures. “Corona struck us like a natural disaster.”

The bottom line was that the number of passengers dropped by 80 percent to three million and the number of flights dropped by 70 percent to 42,310. However, the latter is not a good sign, but the opposite. It shows that the load factor of the aircraft has also decreased by around 20 percentage points to 62 percent. The AUA also became less profitable.

Expressed in euros, this meant a decline in sales from 2.1 billion to 460 million euros. After deducting the costs, there was a record loss of 319 million euros (excluding the depreciation for the value of the aircraft amounting to 60 million euros). The worst result in the company’s 63-year history. Operationally, however, the picture looked even gloomier, according to von Hoensbroech. The figures already include the non-repayable state aid in the amount of 150 million euros. “Without this aid we would be minus half a billion euros,” said the AUA boss.

Von Hoensbroech also emphasizes that the situation for the AUA in the previous year was absolutely life-threatening. “Without the rescue package, we would no longer exist.” At the moment, however, it is financed to such an extent that it can be made over the mountain without further help – if the situation recovers in the summer, which is particularly important for aviation.

Von Hoensbroech does not want to say how much money the AUA has in the account. The so-called cash burn rate, however, has fallen from “one to two million” per day in the previous year to “half a million to one million” euros. The reason for this was state aid such as short-time work and the deferral of taxes on the one hand and tough cost management on the other.

“We are still turning every stone.” For example, home offices should play “a bigger role” in the future – also because AUA wants to give back half of its space at the airport, so that not every employee has their own desk. The number of these had already been reduced from 7,000 to 6,400 people in the previous year due to fluctuation. Half of the arithmetical overhang of 1,100 employees has thus already been reached. “We are grateful that eight percent of the employees have left us, even if we are always sorry in individual cases,” said the AUA boss.

It is crucial for the future of the AUA that flying will be possible again for many people in summer thanks to vaccinations. Then the subsidiary of Lufthansa, which suffered a loss of 6.7 billion euros in 2020, expects the occupancy rate to increase to 60 to 70 percent. This should result in a value of 40 to 50 percent for the year as a whole. Less than in the business plan from a year ago, but enough to survive on its own.

Even though there will be a loss this year and AUA will have to repay not only the guaranteed loans of 300 million euros, but also the deferred taxes at some point. Even if everything goes well, AUA will still have a few tough years ahead of it. (jaz)

Weather in Germany: Polar vortex broken – is the freezing cold...

Oumuamua secret could be out

Landing ban for aircraft from Great Britain in force