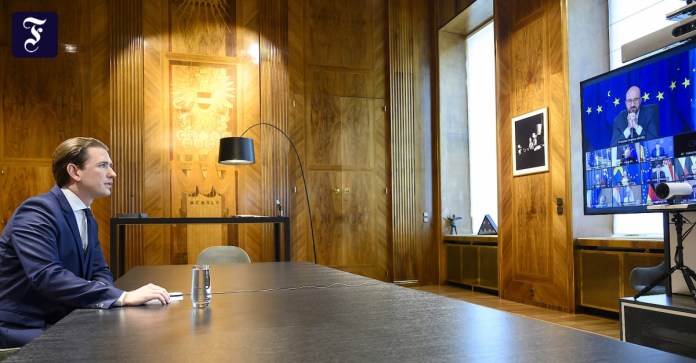 Sebastian Kurz presented himself as the winner on Thursday evening after the video summit of the EU heads of state and government. “Happy, relieved and satisfied,” said Austria’s Chancellor after the deliberations. He had “worked intensively for a fairer delivery of vaccines in the EU”. This was then also decided for the second quarter.

Angela Merkel assessed the result differently. The EU ambassadors, who would now have to deal with the vaccine distribution, were “facing the squaring of the circle,” said the Chancellor. One thing is certain: the dispute initiated by Kurz over a partial redistribution of vaccines in the EU was not resolved at the summit.

Two sentences were added to the final declaration of the summit. There is no mention of a “compensation mechanism”, as Kurz called for it together with the Prime Ministers of Croatia, Slovenia, the Czech Republic, Bulgaria and Latvia. It expressly states: “We confirm that the vaccines are allocated proportionally based on the population.” At the same time, the heads of state and government asked their EU ambassadors to answer the question of how quickly 10 million vaccines from Pfizer-Biontech will be allocated in the second quarter can “treat in a spirit of solidarity”.

Three reasons for his commitment

Kurz named three reasons for his commitment on Friday. Firstly, it is an important sign in terms of European policy if all EU states can vaccinate their citizens to roughly the same extent by the summer. Second, most of the particularly affected states are more or less in the vicinity of Austria. Briefly named Croatia, Slovenia, the Czech Republic and Slovakia; in a broader sense also Bulgaria. It is also in the European interest that the pandemic does not continue to rage in those countries in the summer. Third, Kurz added in Vienna, it would of course also be nice if Austria benefited from the redistribution.

In Brussels, the displeasure briefly persisted on Friday. Diplomats complained that the Chancellor diverted attention away from the more important debate on how the EU as a whole could secure more vaccine. In contrast to what Kurz said, nothing has changed in the matter. When the ambassadors deal with it next week, the exact compromise proposal of the EU Commission that Austria has rejected so far will be on the table.

That consists in dividing an additional contingent of the Biontech Pfizer vaccine of 10 million doses, which the EU was able to secure for the second quarter, according to a special key. 7 million doses should be distributed according to population, the rest according to a different formula, to those countries most affected by the current unequal distribution. Austria is not one of them.

Nationwide corona lockdown: Many shops in Berlin should close on Wednesday...

VfB Stuttgart: Timo Hildebrand on the Junge Wilde 2.0 and the...

Mainz 05 negotiates with ex-board member Heidel – return after the...

Corona: should I get the AstraZeneca vaccine?