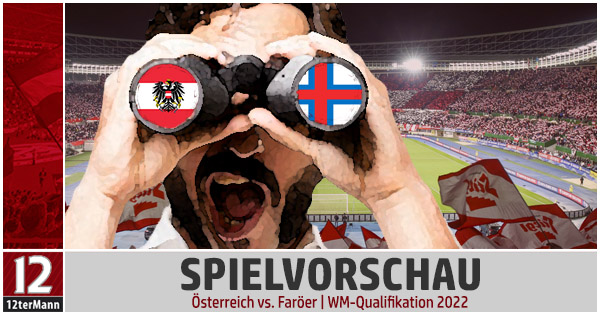 The 2: 2 in Scotland is checked, now it goes for Austria’s national team in the World Cup qualification continue with a compulsory task. The National team receives on Sunday in Vienna Faroe Islands. The kick-off will be steeped in history and a great signal to the football world, because for the first time there will be one Mrs at an ÖFB international match of the A national team as Main referee act. Otherwise Austria would not have planned any further entries in the history book – there are against them Faroe Islands yes enough already.

Austria’s history against the Faroe Islands is well known. 1990 the historic 0: 1 below Josef Hickersberger or in 2008 the disappointing 1: 1 below Karel Brückner. Most recently, the slip-ups against the smaller nations were just a ghost of the past – the national team has won the last three games against the Faroe Islands and also scored nine goals against the “Sheep Islands” in the 2014 World Cup qualification. Even today nothing should burn in Vienna’s Ernst Happel Stadium, otherwise the dream of the World Cup could burst far too soon.

“The team (Faroe Islands note) comes here and in principle has nothing to lose. We’re the big favorites and have to decide the game for us. The opponent is well organized. We just have to keep the pace fast in the game, have the necessary calm and patience. It is important that we are at 100 percent and not let up a second in the game, so team boss Franco Fuckwho especially wants to avoid counter-situations against the Faroe Islands. “Only three points count for us“, Clarifies the 54-year-old in the final press conference.

It is undisputed that the Austrians are looking for three points and a warm-up for the trend-setting game against Denmark on Wednesday. The national team must of course not underestimate the Faroe Islands. The one from Sweden Hakan Ericson trained team has developed well in recent years. In 2020 the UEFA Nations League group will be won in Division D, opponents are Malta, Latvia and Andorra. The Faroe Islands do not lose a game and are promoted to Division C. The 1-1 draw in Moldova on Thursday also made a good start to the World Cup qualification. Nevertheless, the high quality of the Austrians should prevail – even if it could be a game of patience at first.

“I think that the smaller nations are often very well structured. It will be very difficult to score a goal because you defend with man and mouse and it is very difficult to find spaces. Nevertheless, we have the quality that we will assert ourselves and make it ”, said Hoffenheim legionnaire Christoph Baumgartnerwho demands one hundred percent concentration and the necessary speed right from the start.

The national team can fall back on all the players who were also fit on Thursday in Scotland. Martin Hintergger is still missing against Faroe Islands, behind Marcel Sabitzers commitment is still a big question mark. But Foda has announced some changes, some fresh forces should come into play against the underdog. With that the two Rapidlers could Ercan Kara and Yusuf Demir at least take a seat on the bench and hope for minutes of action, against the Scots they were not in the squad.

The Faroe Islands travel to Vienna mainly with players from the domestic league Betri-deildin, but there are also some legionnaires. For example the offensive midfielder Jóan Símun Edmundsson, who is under contract with the German Bundesliga club Arminia Bielefeld. Transfermarkt.at estimates its market value at EUR 500,000, making it the most expensive player in the squad. Also there Sonni Nattestad. The 26-year-old central defender plays for Irish club Dundalk and played against Rapid in the Europa League in autumn. But if Austria wants to talk about group victory and permanent participation in the World Cup, the Faroe Islands must not be a stumbling block despite the upward trend. The kick-off in the Ernst-Happel-Stadion is at 8:45 p.m., ORF1 broadcasts live. The referee is the 39-year-old Ukrainian Kateryna Monsul and thus the first woman to lead an international match for Austria’s senior national team.

Meteorite that fell on the UK alley is “extremely rare” and...