Team boss Werner Gregoritsch’s selection defeated Saudi Arabia’s 10-0 (6-0) in a test match at their training camp in Spain on Saturday. A more serious yardstick will follow on Monday (3 p.m. / live ORF Sport +) with another test against Poland, also in San Pedro del Pinatar.

“It was nice to see how quickly we got into the game and this willingness to implement things was shown by the players in all training sessions. The opponent kept having problems with our pace and we made good use of that,” said the team Gregoritsch.

Nice legioner Flavius ​​Daniliuc, who led the selection as captain, emphasized the quick mutual understanding. “We have known each other for five or six days now. It is really impressive how we were able to implement all the tactical guidelines today. The game showed that we are very good.”

It will get serious for Austria’s new U21s for the first time on June 8th with the start of the European Championship qualification at home against Estonia. The other opponents in the fight for a ticket for the 2023 finals in Georgia and Romania are Croatia, Norway, Finland and Azerbaijan.

Samsung, Apple and Xiaomi in the Test – Best Smartphones 2020

Germany in lockdown: These stricter corona rules could be decided today 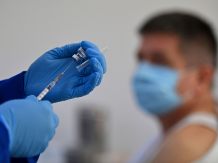 “I’m sick of it!”: Kerstin Ott rages on Instagram and speaks...

So a premature baby from Glandorf struggled into life with medical...

Sawsan Chebli’s brother in intensive care because of corona disease –...