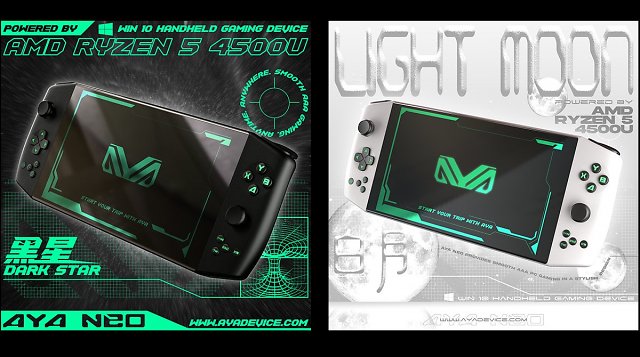 The handheld gaming PC Aya-Neo, which is similar to the Nintendo Switch due to its form factor, was recently available on Indiegogo.com at prices starting at the equivalent of 588 euros (42 units) and 663 euros (500 units) in the smallest version with 500 GB NVMe SSD launched for supporters (plus taxes / customs). The 7-inch device equipped with a Ryzen 5 4500U mobile processor along with 16 GiB RAM and an integrated Radeon Vega 6 graphics unit has already received the equivalent of over 1.13 million euros in financing.

Originally only a flexible financing target of the equivalent of just 45,532 euros was on the plan, but the rush was great: Over 40,000 interested parties were already waiting for the start of pre-orders. Accordingly, the limited early bird packages for supporters in the cheapest versions are already sold out and currently only the 1 TB version is available in a few quantities from the equivalent of 732 euros and a complete package with accessories for 807 euros, with taxes and customs fees still available are to be added. The delivery to the supporters should take place next May.

In the meantime, “Founder’s Editions” that have already been delivered and initial tests already gave an outlook on the performance and battery life of the small powerhouse. The Aya-Neo from the manufacturer of the same name from China competes with comparable handheld PCs such as the already financed “Win 3” based on Tiger Lake from the somewhat more established manufacturer GPD. With the Smach Z, however, there had also been a comparable crowdfunding project from China in the past, which ultimately never made it to the planned mass delivery after many delays.

Advertising: Discover the best PCGH game PCs now at Alternate
Recommended editorial contentHere you will find external content from [PLATTFORM]. To protect your personal data, external integrations are only displayed if you confirm this by clicking on “Load all external content”:

The Geforce RTX 3070 offers the performance of an RTX 2080 Ti and with the Ryzen 7 5800X, AMD has also succeeded in an extremely good new processor

PCGH advisor: This is what a gaming PC for 2,300 euros could currently look like [Werbung]

What could the best gaming PC for 2,300 euros look like from the point of view of the PCGH adviser team? All information about the PC components.

PCGH Plus: Which PC components, and thus which PC in the end, are ideal for image processing, especially for Adobe Photoshop? We have detailed, up-to-date answers for you. The article comes from PC Games Hardware 08/2020.
more …

Image gallery for “Ryzen handheld: Aya-Neo manages one million on the first day”

Max Rose does not run for mayor

Smartphone with Google apps is reduced

On the death of James Levine

The coronavirus also shaped the everyday life of the national team...