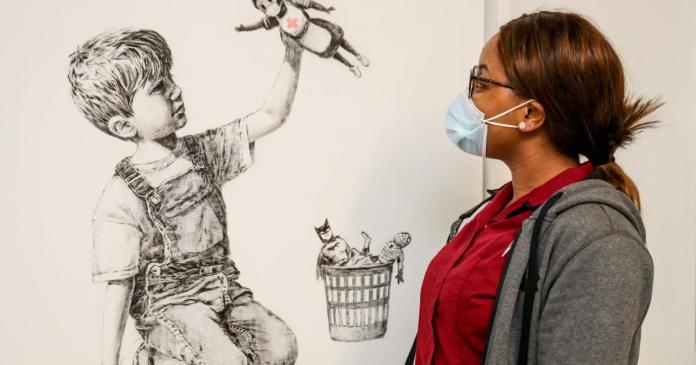 A Banksy painting in honor of the NHS staff was auctioned for a record price in London on Tuesday. At the auction at Christie’s, the black and white picture with the title “Game Changer” changed hands after a violent bidding dispute for 16.75 million pounds (19.45 million euros). The estimate was between £ 2.5 million and £ 3.5 million. The proceeds will go to the NHS.

The one square meter picture hung in a hospital in Southampton in southern England since last May. It shows a boy floating a small nurse doll with a mask and a superhero cape through the air – while Superman and Batman dolls have landed in a wastebasket.

In a note to the hospital staff, the British street artist wrote: “Thank you for everything you do.” He hopes the picture will “brighten up the place, even if it is only in black and white”. It was already clear then that the work would later be auctioned to raise money for the NHS. A reproduction should be kept in the hospital.

Banksy’s works, whose identity is known only to the initiated, are in great demand. The previous record price of 9.9 million pounds was achieved in 2019 by the image “Devolved Parliament” (about: Delegated Parliament). It shows the British House of Commons where chimpanzees lead the debate.

Star Citizen: Squadron 42 will probably be a long time coming

“Murderer” slogan on the doors: Car rams the gate of the...

Prince Harry & Duchess Meghan: They love life in the USA

WDH / FLATEXDEGIRO IN FOCUS: With Corona Turbo in the SDax...

Citizens panic buying before the lockdown