In the midst of the first wave of the pandemic, Banksy had donated a painting to the employees of a hospital in Southampton, England, and now it is to benefit the entire staff of the British health service (NHS): As the auction house Christie’s announced, the painting is to be auctioned on March 23 . The estimated value is between 2.9 and 4.1 million euros.

The one square meter picture with the name “Game Changer” has been hanging in a corridor of the General Hospital in Southampton since last May. It shows a boy floating a little nurse doll with a mask and a superhero cape through the air – while dolls of Superman and Batman have landed in a wastepaper basket.

“Thank you for all that you do”

In a note to the hospital staff, the British street artist wrote, “Thank you for all that you do”. He hopes the picture will “brighten up the place, even if it’s just black and white”. It was already clear then that the work would later be auctioned to raise money for the NHS. A reproduction should be preserved in the hospital.

Christie’s expert Katharine Arnold described “Game Changer” as a tribute to “everyone who is fighting on the front lines of this crisis worldwide”. Even earlier, works by Banksy, whose identity is known only to the initiated, reached in some cases millions.

Notebooks and PCs for all cases 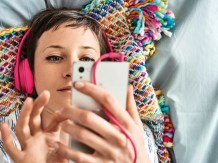 To be too good to be true? Telekom is giving...

Seniors gamble and marvel at the realistic graphics

Nena: After praise for corona deniers – now the singer is...

ABOUT US
DE24 News English is your news, entertainment, music fashion website. We provide you with the latest breaking news and videos straight from the entertainment industry.
Contact us: [email protected]om
FOLLOW US
© de24.news