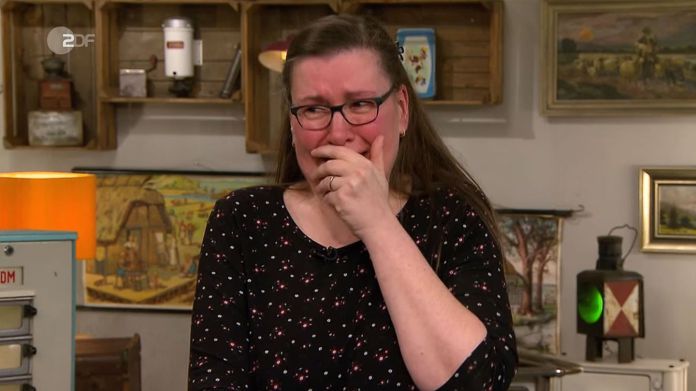 “Bares for Rares”
The saleswoman is crying with happiness – the painting is worth an incredible 35,000 euros

Tears at “Bares für Rares”: Saleswoman Marlies Fischer weeps with happiness when she hears the sensational price for the painting. “We would love to hug you now,” says Horst Lichter – but he is not allowed to do so because of Corona.
© ZDF

It is one of the most expensive objects that has ever been up for sale at “Bares für Rares”: an attic find is worth 35,000 euros according to expertise. But are the dealers moving with you?

The story sounds too good to be true: Marlies Fischer from Duisburg comes to “Bares für Rares” with a painting that has been in her friend’s attic for years. “She is a bit older and got it from her father for the state examination,” says Fischer about the origin of the unusual piece. The 55-year-old already suspects that she has a little treasure with Horst Lichter in the ZDF junk show. But the real value of the work of art exceeds all expectations.

“Otto Müller made the work as a chalk lithograph,” explains “Bares for Rares” expert Detlev Kümmel. Müller was one of the expressionists who came together in the artist group “Brücke”. “He’s really a big name,” says Kümmel, but unfortunately Müller only created a few pictures. That makes the present sheet all the more valuable. The specialty is that the artist colored the lithograph afterwards. “I looked carefully, it was made by him, otherwise his signature would be blurred,” explains the expert. The work, which was created around 1920, is extraordinary.

Sensation: Most expensive painting in “Bares for Rares”

“I had no idea who Otto Müller was,” says saleswoman Fischer. However, your internet research showed that the work of art could be worth 10,000 euros. “Old Swede,” says Horst Lichter, shocked. But the expert Kümmel does not agree. “If the sheet weren’t colored, we’d be at 10,000 euros,” he says. But the present sheet is unique – and therefore worth 30,000 to 35,000 euros. “I’ll commit myself to that.” Fischer can hardly believe the price and bursts into tears with happiness: “That’s crazy.” The work of art is the most expensive painting that is ever for sale at “Bares für Rares”.

But what are the dealers willing to pay? “Did you know what kind of treasure you have there?” Asks Wolfgang Pauritsch from the saleswoman. She admits that she is only now understanding the true value. Pauritsch starts with a bid of 5000 euros. “Of course that is not the adequate offer,” says Daniel Meyer. Fabian Kahl doubles up: 10,000 euros. The price is rising rapidly to dizzying heights. Susanne Steiger believes that the lithograph has a high value with collectors because of the colors and offers 30,000 euros. Kahl puts another 500 euros on it. Everyone else get out. “We’ll do that,” says Fischer happily.

Since Kahl doesn’t have enough cash with him, he pays 2000 euros. “I’ll transfer the rest,” says the dealer from Thuringia. With it, he and the work of art write “Bares for Rares” history. After a relic for 42,000 euros (bought by Susanne Steiger) and a Borgward Isabella for 35,000 euros (bought by Wolfgang Pauritsch), it is the third most expensive object that has ever changed hands on the show. “My friend breaks down in tears. She won’t believe me for 30,500 euros,” says Fischer. And Fabian Kahl adds: “That feels awesome. I bought a real Otto Müller.”

Source: “Bares für Rares” from March 23, 2021. New episodes of the junk show can be seen from Monday to Friday at 3:05 p.m. on ZDF and in advance in the media library.

Emma Stone: the actress is pregnant!

Economy crashes even without lockdowns

Lateral thinkers as Covid-19 super spreaders: How many were infected?

Dilemma for WhatsApp users: Those who do not agree to this...