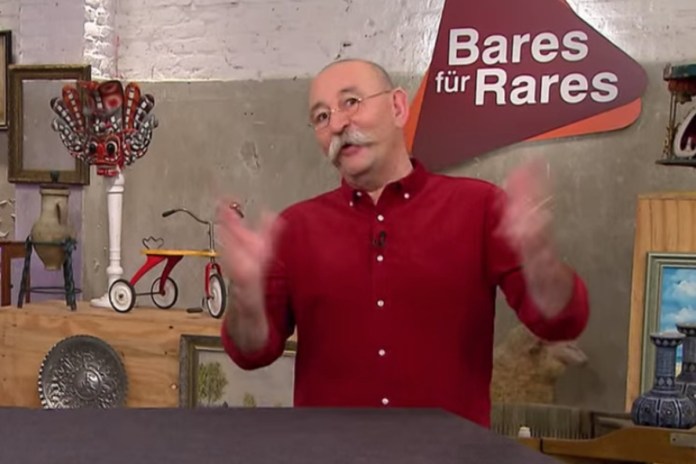 At Bares für Rares, viewers had to briefly worry about presenter Horst Lichter on Wednesday. He spoke repeatedly in a loop.

Cologne – Who is the latest episode of Cash for rares on ZDF, is likely to have serious concerns about the presenter at the beginning of the show Horst lights (59) have made.

His introduction to the iconic junk show has long been a little laugh in the afternoon.

But yesterday, Wednesday, everything was somehow different with “Bares for Rares”.

Horst Lichter repeated his cult announcer several times: “Hello and welcome to …” The motorcycle fan picked up the sentence three times in a row, somehow stuck in a word rotation.

Since Horst Lichter had suffered two strokes and a heart attack at a young age, the strange flow of speech in a continuous loop caused a brief moment of shock.

Fortunately, the “Bares-for-Rares” entertainer was doing well. He had just found a new introduction and was stuck in a very personal loop.

With a wink he laughed himself at the joke, which initially caused confusion.

Lights itself was only awakened from its continuous loop by a loud thud on the moderation table. After that he was fine and consistently hosted the latest episode of “Bares for Rares”.

Again and again, the hat wearer of 2020 surprises the audience with his imposing mustache and introduces the show with a little joke.

For example, he caused a sensation as a disguised burglar at “Bares for Rares” in November 2020.

Don’t worry: nothing was stolen from the production halls in Cologne, the busy moderator had only disguised himself as a thief and came up with a new introduction.

Some viewers still felt their hearts slip at the gloomy sight.

Since 2013, owners of unusual, rare and valuable items have been able to offer their treasures to the dealers’ podium on the ZDF broadcast. You can find the episode in the ZDF Mediathek. New episodes will run from Monday, March 8, 2021, again at 3:05 p.m. on ZDF.

FK Austria Wien confident against “in shape” SK Sturm: “It will...

A COVID test can turn into a day trip in Freistadt

Storm warning for NRW and Germany: where storms threaten today

Jens Spahn live on the corona vaccine from Biontech – press...