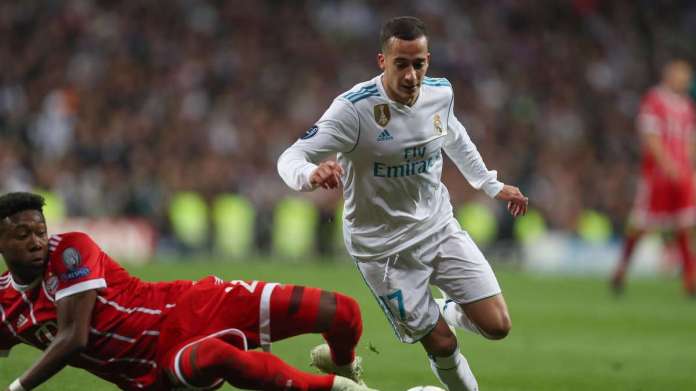 FC Bayern may have struck gold in the search for a new offensive force. A Real Madrid royal could swap sides with David Alaba.

Munich / Madrid – The transfer plans at FC Bayern are in full swing – and are becoming more and more specific. Some stars could leave Munich in the summer, but others are likely to come.

The moving of chairs in the FC Bayern squad has long since begun. Defense chief David Alaba will look for a new challenge and not renew the contract, his goal should be Real Madrid. In addition, the contracts of the over 30 defensive players Jerome Boateng and Javi Martinez are running out. As of now, neither will get a new working paper.

With Dayot Upamecano from RB Leipzig, sports director Hasan Salihamidzic has already found an Alaba successor. The transfer of the 23-year-old defensive all-rounder Omar Richards from the English second division FC Reading has also been bagged, but the club’s confirmation is still pending.

FC Bayern: Brazzo has done his defense homework – how does it look on the offensive?

In the defense area, Brazzo did his first homework before the hot transfer phase in the summer. But what about the offensive? FC Bayern has perfected its offensive game with two wingers in recent years. The ideal in the squad is to have four winger players at the top level.

Before the current season Douglas Costa was loaned to Juventus Turin as a back-up to relieve the trio Kingsley Coman, Serge Gnabry and Leroy Sané. But the Brazilian disappointed after his return and, to top it all, has been out with a hairline crack in his foot since mid-February. A further employment of the 30-year-old seems out of the question.

With Jamal Musiala, a youngster jumped into the breach. As a reward, the 18-year-old jewel was even nominated for the German national team by Jogi Löw. However, FCB coach Hansi Flick sees the midfielder in a more central role.

Thus, the Munich have to look for a successor for Costa and have allegedly already done that. Real Madrid’s Lucas Vazquez is said to be a candidate. According to the Spanish newspaper As, those responsible at Bayern have already started talks with the player. The negotiations are said to be “very advanced”. An agreement could even be reached in the coming days.

And best of all, not unimportant especially in Corona times, Vazquez could make a free transfer in the summer. Should Alaba actually find their way to Madrid, Bayern could in return grab a Real Star for free. Another advantage: the right winger can also take a right-back. The 29-year-old has proven this several times this season when he replaced the often injured Dani Carvajal. Thus, the Munich could solve another problem.

FC Bayern: Lucas Vazquez in “swap” with Alaba – Königlicher could solve many problems

With Vazquez there would be a reliable substitute for the regular right-back Benjamin Pavard. His French compatriot Bouna Sarr could not convince in his first season, but still has a contract until 2024. In addition, Pavard may also be needed in central defense. If Niklas Süle leaves prematurely (contract until 2022), this scenario could arise, even if Flick should not trust the world champion to play the central role.

Bayern should hurry up. According to reports, top clubs Arsenal London, Tottenham Hotspur and AC Milan are also interested in Vazquez. The former Spain international was trained by Real Madrid in his youth and has been with the club for 14 years. Vazquez played 237 competitive games for Los Blancos and won the Champions League three times. In the summer he has another opportunity, similar to the one Alaba intends to venture into a new adventure in his career at another top club abroad. (ck)

RTL presenter Knossi outraged with a nasty joke about the German...

Shiren the Wanderer: The Tower of Fortune and the Dice of...

6th corona survey by SRG – readiness to vaccinate in Switzerland...

Pope calls for corona vaccine for everyone in Christmas message