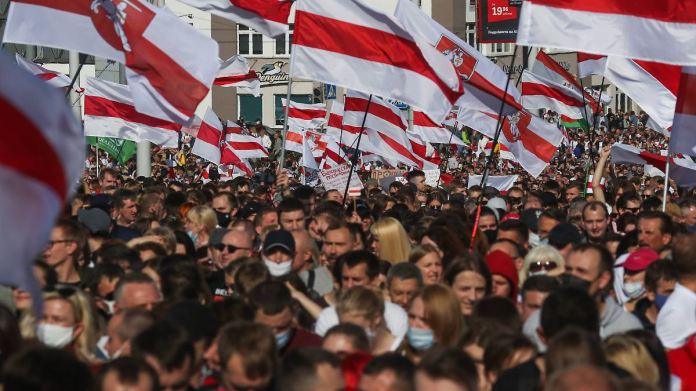 Because of Lukashenko’s propaganda
Belarus excluded from the Song Contest

When the semi-finals of the 65th Eurovision Song Contest starts in Rotterdam on May 18th, musicians from Belarus will be absent from the stage. The reason is the texts of the submitted contributions.
Belarus will be excluded from the Eurovision Song Contest (ESC) in May. That was decided by the European Broadcasting Union. The newly submitted song also violates the ESC rules, which ensure “that the competition is not instrumentalized or discredited”. The state broadcasting company of Belarus failed to “submit an eligible contribution within the extended deadline,” it said.

Initially, the country had submitted the song “Ja nauchu tebja” (“I will teach you”) by the band Galasy ZMesta to the competition. The ESC organizers complained that the song in its current form “questions the non-political character of the competition”. There had been complaints because the song with lines like “I’ll teach you to dance to the tune” mocked the protest movement against long-term ruler Alexander Lukashenko in the eyes of many people.

After the criticism, Belarus submitted a new song by the band, which has now also been collected by the ESC officials. The contribution from Belarus was actually intended for the first semifinal of the song contest on May 18 in Rotterdam.

Last year there were mass protests against Lukashenko for months after the presidential election on August 9, which was widely considered to be falsified. The head of state, criticized as the “last dictator in Europe”, had the electoral commission declared himself the winner again after 26 years in power. The EU no longer recognizes him as president. Tens of thousands of people were arrested. Many of them experienced massive police violence.

Mastermind of the Ibiza scandal arrested in Germany – politics

Brexit negotiations shortly before the deadline still without a solution

Bankruptcies will trickle like needles from a Christmas tree – BZ...

Start of the Vienna ski season: with the Corona beeper on...

Poles are poisoning in the EU squabble against Merkel – “You...

Coronavirus in Germany and the world: blog archive from October 12th...