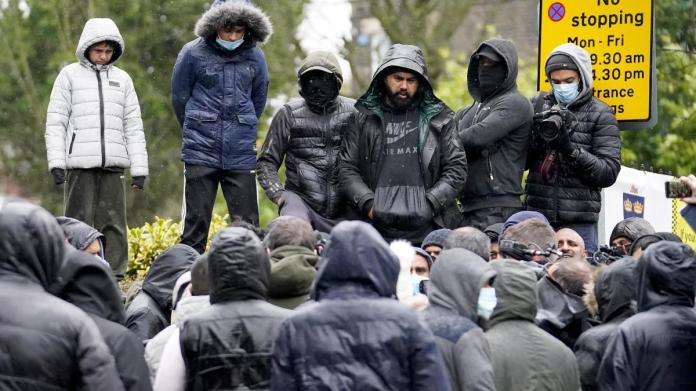 Because of Mohammed pictures – protests against teachers at an English school

There have been protests in front of a school in West Yorkshire for days, at times it even had to be closed: a teacher had apparently treated caricatures of the Prophet Mohammed in class. Now the educator receives death threats.

FThe approximately 980 children of the Batley Grammar School surprisingly had no school on Friday: Before that, around 50 people had repeatedly gathered in front of the building and thus massively hindered the processes.

Now the British government has also intervened in the dispute: It condemned the protests, which are explicitly directed against a teacher who had shown drawings of the Islamic prophet Mohammed at a school. “It is never acceptable to intimidate or threaten teachers,” said a spokesman for the education ministry.

The educator, who works at the West Yorkshire Grammar School, was suspended from duty on Thursday. As the “Daily Mail” reports, the man and his girlfriend have meanwhile been taken to an unknown location because there are also alleged death threats against him. Previously, his name was apparently published by critics on social media.

At the beginning of the week, the man had shown drawings of the Prophet Mohammed in religion class. According to reports, they were caricatures from the French satirical magazine “Charlie Hebdo”. According to the protesters, this is an attack on Islam that rejects images of Mohammed.

According to British media reports, one third of the students at Batley Grammar School come from families of Muslim faith. Some demonstrators, some of whom had even come from other British cities, not only gathered in front of the building, but also sang slogans and songs. In addition, Muslim clergy gave speeches calling for the man to be released. However, it is unclear whether parents were among the protesters.

An independent investigation into the incidents has now been initiated. “The kind of protests that we have seen, with threats and disregard for the corona restrictions, are completely unacceptable and must stop,” said the Ministry of Education.

Schools have the right to include a wide variety of materials and views on controversial issues in the classroom. However, both political balance and respect for people of different faiths must be observed. Corona lockdown for children – Arche founder in BILD: “Children have...