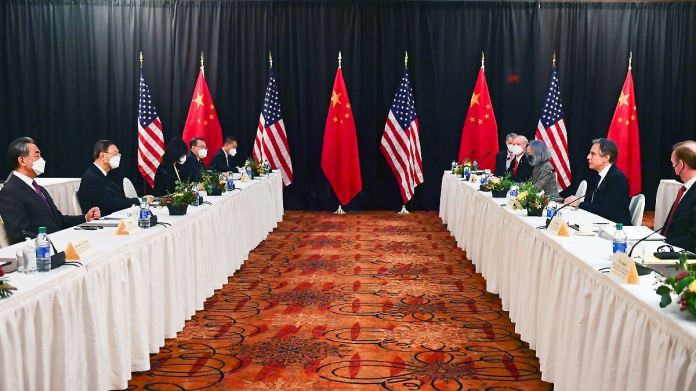 Because of Uyghur politics
China is imposing sanctions on the USA

In the Chinese province of Xinjiang, the Muslim Uighur minority is systematically suppressed. The EU, Great Britain, Canada and the USA punish this with sanctions. China strikes back again – this time it’s not just the USA.
China has also imposed punitive measures against politicians from the US and Canada in response to sanctions for suppressing the Uyghurs. This includes, among other things, an entry ban. Affected are two members of the US Commission on International Religious Freedom, Gayle Manchin and Tony Perkins, as well as Canadian MP Michael Chong and the Canadian Parliamentary Committee on Human Rights, the State Department said in Beijing.

The UK, the EU, Canada and the US imposed sanctions on China earlier this week because of the repression of the Uyghur Muslim minority in northwestern Xinjiang Province. Beijing reacted angrily to the measures and imposed sanctions on ten politicians and scientists as well as four organizations from the EU, including the German MEP Reinhard Bütikofer.

China accuses the US and Canada of imposing sanctions “based on rumors and disinformation”. The sanctioned “must stop political manipulation on Xinjiang-related issues and stop interfering in any way in China’s internal affairs,” the ministry said.

According to human rights organizations, at least one million Uyghurs and other Muslims are imprisoned in hundreds of detention camps in Xinjiang. There they would be forced to give up their religion, culture and language and in some cases also mistreated. Beijing rejects the allegations and speaks of training and work programs aimed at combating extremism in the regions.

Instead of bureaucracy: finally vaccinate faster!

Family quarrel in Moers – shots at the Bethanien Hospital