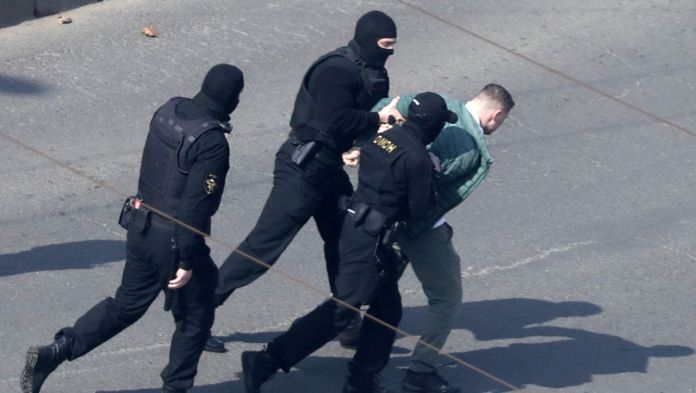 A massive deployment of security forces put an end to new protests in Belarus against the authoritarian President Alexander Lukashenko. More than a hundred people were arrested across the country, including journalists. According to Deutsche Welle (DW), a German reporter who was detained at a police station for several hours was also affected.
In Minsk, the opposition had called for a demonstration in the center of the capital that afternoon. There was talk of the first major opposition action that year. However, after there had apparently no gatherings in the capital Minsk, the opposition called for small, decentralized actions.
There had been no major protests over the winter – also for fear of police violence. It was not until Thursday that hundreds of people took to the streets against Lukashenko for the first time on the so-called Freedom Day. The authorities spoke of more than 200 arrests, and there were even investigations against drivers who honked on the street in solidarity with the demonstrators.

The civil rights activist Svetlana Tichanowskaja, who is seen by the opposition as the true winner of the presidential election, again campaigned for negotiations with the authoritarian leadership under international mediation on Saturday. In this way, a “peaceful way out of the crisis in Belarus” could be found, she wrote on Telegram. More than 750,000 people have already voted to start such negotiations on a specially set up online platform.

After the presidential election on August 9, which was widely considered to be falsified, hundreds of thousands of people demanded Lukashenko’s resignation and new elections. The police brutally attacked demonstrators and arrested tens of thousands. The head of state, called “Europe’s last dictator” by critics, had once again been declared the winner after 26 years in power. The EU, however, does not recognize him. He relies on Russia as an ally.

Even with a further term in office: Trump may not tweet...

Christmas weather in Germany: “Snow bomb” comes to Munich – one...