The real estate group Deutsche Wohnen, which is listed in the Dax, was able to increase its earnings again in the pandemic year 2020: With “earnings before taxes” of 2.24 billion euros, the Berlin-based company exceeded the previous year’s result (2.1 billion euros). The success is largely due to valuation gains (1.9 billion euros). Because of the “rent cap” introduced in Berlin, the “result from apartment management” fell to 720 million euros (previous year: 729.8 million euros).

“We stand by our promise that no tenant has to give up the apartment or their own business because he or she has difficulties due to the corona pandemic,” said Lars Urbansky, head of Deutsche Wohnen. The losses in rents in the year of the crisis are, however, small: At 837.6 million euros, they reached “roughly the level of the previous year,” as the group announced.

At the end of last year, the stock corporation’s housing stock comprised a total of around 155,400 residential and 2,900 commercial units. A large part of the real estate is in Berlin. Most recently, Deutsche Wohnen had also started building new properties.

As the group also announced, “the Berlin rent cap in the past financial year led to a decline in existing rents in the entire portfolio by 4.1 percent to an average of EUR 6.70 per square meter”. In the second quarter of 2021, the board of directors expects a decision by the Federal Constitutional Court in Karlsruhe on the Berlin special route to regulate rents.

The Supervisory Board and Management Board will propose a dividend of EUR 1.03 per share to the Annual General Meeting on June 1, 2021.

Deutsche Wohnen is the largest landlord in Berlin. It is at the center of a referendum with the aim of socializing all corporations with more than 3000 residential units. The “Deutsche Wohnen & Co expropriate” initiative is currently collecting signatures. You are aiming for a decision on expropriation on the day of the elections to the Berlin House of Representatives and the Bundestag in autumn.

Husband of Kamala Harris: The first second gentleman in the USA

Covid-19 in the retirement home: A relative tells what a year...

Litschauer criticizes the expansion of the North Korean nuclear program 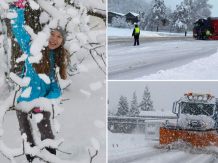 Vorarlberg is sinking in the snow – Fire brigades in constant...