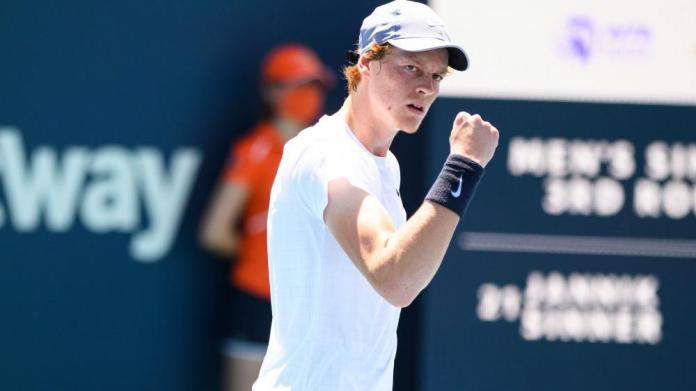 After a great fight and an extremely exciting game, Jannik Sinner defeated the Russian Karen Khachanov in the 3rd round of the Masters 1000 tournament in Miami on Sunday.

For long stretches of the game it was the, as expected, exciting and balanced match between the world number 31. Sinner and Karen Khachanov, currently in 22nd place, Sinner could cheer at the end. After 2:52 hours of play and 3 sets, the 19-year-old from Sexten decided the game with 4: 6, 7: 6 (2) and 6: 4.

Sinner had to fend off a breakball from Khachanov in the first game of the first game and took the lead. In the second game, the young man from Sesto finally managed the break and thus the lead to 2-0. In the third game, Sinner had to accept the break, then the 24-year-old Khachanov was able to equalize. Another lost service game by Sinners finally brought the Russian into the lead, who shortly thereafter had to give up his serve again.

The two opponents offered tennis at a high level, the sticking point in the first set was finally 4: 4, when Sinner had to accept another break. Then Khachanov acted confidently and also converted the first set ball. Side detail: At the same time, he also ensured the first game without losing points in this match.

Sinner trumps in the tiebreaker

The second set remained exciting until the end: Sinner took the lead, but had to fend off a breakball again. Khachanov equalized without losing points, Sinner took the lead again. Both rivals continued to play their service game. While Sinner had 12 break chances in the first set, he was denied a break ball in the second set. It happened as it had to: Set 2 went into the tiebreak. And here Sinner came up trumps and showed his best tennis. When the score was 1: 1 Khachanovs lost his service game. The young Sesto, on the other hand, managed his serve both times.

At the score of 4: 2, Sinner finally took the serve from the Russian again. The 5: 2 lead was followed by 6: 2 and finally a set ball that was sure to be transformed.

The 3rd set offered a similar picture for a long time: the two opponents showed strong tennis and served through. Even in the third set, Sinner had no break chance for a long time. Up to the 9th game: After strong rallies, the Pusterer was able to take the serve from the Russian.

In the following game – it should ultimately be the last in this match – Sinner continued to trump and took a 30: 0 lead. Khachanov came up again and equalized at 30:30. Then it was again Sinner who took the lead on his own serve and got the match point. The young Sesto kept his nerve and finally decided the game for himself.

After almost 3 hours of play, it was clear: Jannik Sinner is in the round of 16 of the ATP tournament. There he meets the winner of the game between the Finn Emil Ruusuvuori (ATP 83) and Scheden Mikael Ymer (ATP 95). Against the Finn, Sinner leads head-to-head 1-0, against the Swedes he has a balanced record of 1: 1.

With the 90 ATP points won, Sinner also made it into the top 30 of the world rankings. In the live ranking, Pusterer is currently in 28th place.

Interim balance of the vaccinations – tirol.ORF.at

Lara Gut-Behrami finished 2nd in Crans-Montana despite back pain

From packer to eloquent author: Ludwig Fels is dead Police use pepper spray in Hildburghausen